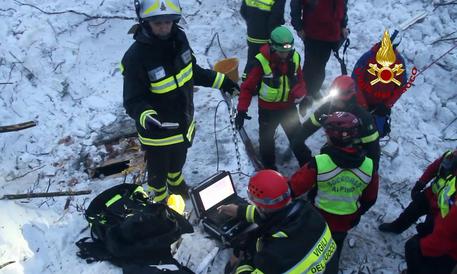 (ANSA) - Rome, January 24 - The death toll from the Hotel Rigopiano disaster climbed to 15 on Tuesday when firefighters recovered the bodies of six more victims. As a result the number of people missing after an avalanche hit the Abruzzo mountain hotel last Wednesday has dropped to 14.
Eleven survived the disaster, including nine who were pulled out of the ruins by search teams.
The first funerals, for two of the victims, are taking place on Tuesday.
In Farindola, just a few kilometres from the hotel, a funeral was held for hotel headwaiter Alessandro Giancaterino, 42.
Farindola's San Nicola Vescovo church was crowded with mourners, among whom were Giancaterino's wife, his nine-year-old son, his brother, Pescara prefect Francesco Provolo, Farindola Mayor Ilario Lacchetta, and Deputy Interior Minister Filippo Bubbico.
Also in attendance was hotel concierge Fabio Salzetta, who survived the avalanche but lost his sister, who also worked at the hotel, in the disaster.
In nearby Penne a funeral will be held on Tuesday for hotel waiter Gabriele D'Angelo, 31.
There were 40 people in the hotel when the avalanche hit: 28 guests, including four children, and 12 employees.
All four children were rescued.