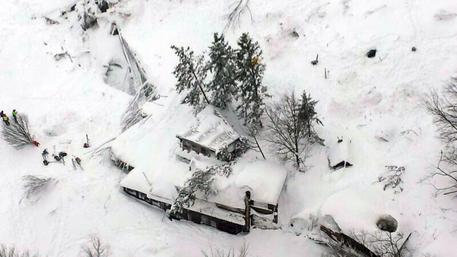 (ANSA) - Rome, January 20 - Rescuers have tracked down eight people alive, including two children, at the Hotel Rigopiano, Carabinieri police sources said Friday. Two people have been pulled out of the rubble so far - a woman and her daughter. The pair were taken to hospital via helicopter but they seemed in relatively good condition considering the ordeal they have been through, the sources said.
The mountain hotel near Abruzzo town of Farindola was hit by a massive avalanche on Wednesday following a series of powerful earthquakes in central Italy that day.
The wave of heavy snow that has hit much of Italy recently made reaching the hotel difficult at first and has complicated rescue operations.
Around 30 people are thought have been in the hotel at the time of the avalanche.
Two bodies have been retrieved from the hotel and two people were rescued on Thursday