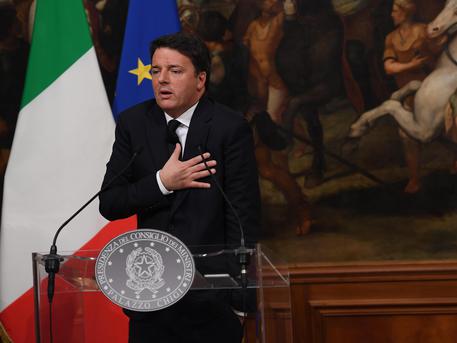 (ANSA) - Rome, November 18 - Center-left Premier Matteo Renzi said Friday that his government was born to reform. "This government was born to carry out constitutional reforms," he told a press conference on the occasion of his 1,000 days in office.
"Citizens will decide (in a December 4 referendum on his constitutional reform law) whether or not we did a good job". Renzi added his task was also to restart the Italian economy after years of crisis and recession. Growth is still sluggish "but much stronger than it was before", he said. GPD has risen 1.6% and family consumption has grown by 3% since he took office on February 22, 2014, he said.
The young reformist premier, who turns 42 next January, added the debt-to-GDP ratio has gone down and that most economic indicators have improved on his watch. "Are we satisfied?" he said. "No, we're hungry for the future and we want to grow more. But the numbers prove the economy is improving".
"I send a big hug out to the economists who say (my government's) 80-euro bonus (for low-income families) had no effect," Renzi continued. "The Bank of Italy estimated the impact (of the measure) at 40%". The premier went on to say that while he has "many, many things to reproach himself for", nobody can doubt "the fact that Italy has objectively restarted" thanks to his government's economic stimulus and welfare policies. "I keep asking myself how we managed to make everybody angry by allocating three billion euros to education," he added.
"Clearly something hasn't worked". Renzi also said that a Bank of Italy report out earlier in the day forecasting "strong market volatility" in the run-up to the potentially game-changing referendum is par for the course. "Personally, I also think it's obvious that GDP will go up if reforms are carried out, and vice versa that the spread (between Italian and German 10-year bonds) will rise if they aren't," Renzi said.
The spread - a key indicator of Italy's borrowing costs and investor confidence - has been rising steadily in the past week.
Today it closed at 182 basis points - up from 181 points yesterday, 174 points Wednesday, and 165 points Tuesday - with the yield at 2.01%. Renzi said that in spite of the fact the most opinion polls see a victory of a 'No' vote at the referendum the outcome is still up for grabs because many voters are undecided.
"The good reasons that drive us to fight for a 'Yes' vote are stronger than ever," Renzi said. "I am certain the silent majority of the Italian people is capable of choosing, based on the (referendum) question".
Renzi said a significant part of Italy hungers for change. "Between 20-30 million people will vote (in the referendum) and must decide if they want to change Italy, or to maintain the current rules," he said. "I have toured the country, and I feel strongly that people out there want a change and I continue to think that - opinion polls notwithstanding - there is room for a 'Yes' vote to prevail". In any case "democracy will speak", Renzi said.