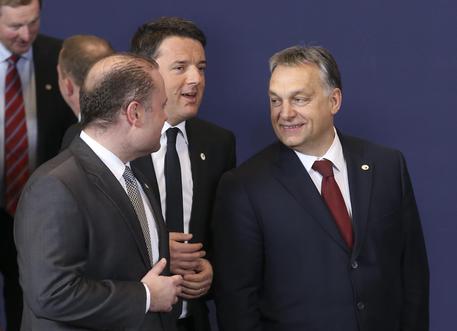 (ANSA) - Rome, October 28 - Premier Matteo Renzi hit back Friday after Hungarian Prime Minister Viktor Orban said he was irritable because of Italy's migrant and budget problems. "Orban has an imprecise vision of Italy," Renzi told Radio Radicale, reiterating that Italy was ready to veto the new EU budget if countries like Hungary keep refusing to do their bit to help with the asylum-seeker crisis. "In other words, it's not true that the deficit is increasing, it is not true that Italy is in difficulty and it's not true we are irritable. "Either Europe acknowledges the documents that Europe itself signed and takes charge of the migrants or there will be a wonderful new development - Italy will veto any budget that does not contemplate equal obligations and equal rights".
Renzi said Italy was no longer willing to be the European Union's moneybox . "Each year Italy gives 20 billion euros to Europe and it gets back 12," Renzi said. "The time when Italy was the piggy bank is over".
He also said that Orban calling him "irritable" showed that his budget veto threat had "made a mark".

Italian Foreign Minister Paolo Gentiloni said Friday that it would be unacceptable if the European Union were excessively strict when it comes to budget rules, while being soft on countries like Hungary that are not respecting obligations to tackle the asylum-seeker crisis.

"Italy cannot accept the idea of a Europe that is strict on (deficit) decimal points and totally tolerant with those who erect walls and don't join in with the decision on migrants," he said. "Italy, in the exceptional circumstances in which it finds itself, has every right to decide its budget, naturally in a dialogue with the European Commission. But without diktats from anyone".