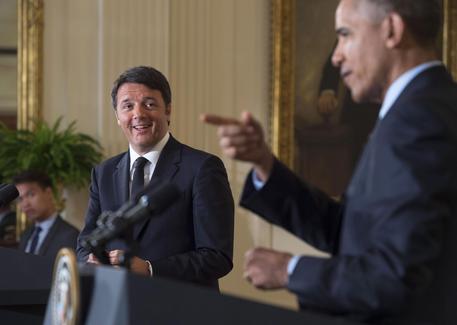 (ANSA) - Florence, October 17 - Italian Premier Matteo Renzi boarded a flight leaving from Pisa Monday afternoon to attend a White House State Dinner honouring Italy, the last one of US President Barack Obama's final term in office.
Renzi said the fact that Italy was chosen shows the strength of the two countries' ties.
"It's a symbolic fact, not a personal one; it's the recognition on the part of our beloved and principal ally of how strong a friendship, a relationship, can be," Renzi said at the government's General State of the Italian Language conference in Florence on Monday.
In an interview on Radio 105, he said that Italy being chosen as the guest of honour was a "great gesture of friendship" on the part of the US president.
"Obama will go down in history for having written some very important pages in good government," Renzi said.
Joining Renzi, his wife Agnese, and the Italian delegation on the flight to Washington D.C. were actor Roberto Benigni and Paralympic wheelchair fencing champion Beatrice Vio.
"It's wonderful that the Italian delegation isn't just institutional," Renzi said, adding that he had also invited CERN Director Fabiola Giannotti, Lampedusa Mayor Giusi Nicolini, and MoMA New York Senior Curator for Architecture and Design Paola Antonelli, in addition to Vio, whom he called "an example for the younger generations".
"The many difficulties that have hit her and wounded her haven't ever stopped her. I'm really happy she's boarding the plane with us".