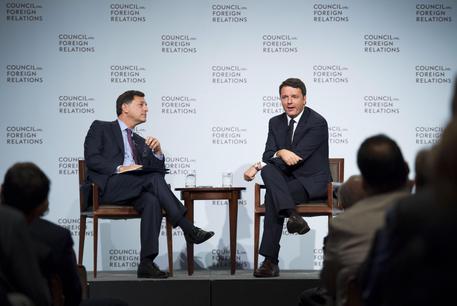 (refiling with new picture).
(ANSA) - New York, September 20 - Germany is the only EU country that benefits from austerity because it exports so much, but it is not respecting rules on trade surpluses, Premier Matteo renzi told the Council on Foreign Relations Tuesday.
"Austerity without vision risks being an incredible mistake and widening the division between countries in difficulty and strong countries," he said. "Who is the only country that receives an advantage from this strategy? The one that exports the most: Germany. But today Germany is not respecting the rules on trade surpluses. I will respect European rules also in the future even though I don't agree. But why doesn't Germany?". Renzi added that austerity would "destroy Europe. He said "the victory of Brexit, of Le Pen, do not come only from migration but also from the lack of hope for new generations. Austerity is not the way for Europe. Stressing austerity means destroying Europe".