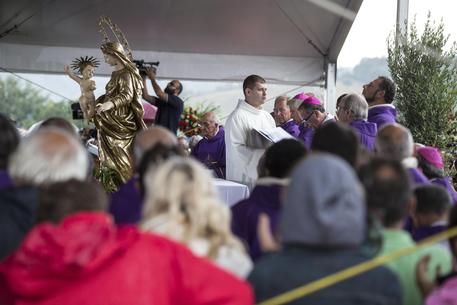 (ANSA) - Amatrice, August 30 - Amatrice Mayor Sergio Pirozzi said after a state funeral for quake victims that "these people died because they loved this land and we want to stay here!", to loud applause from the congregation. "We have two alternatives: that of being overwhelmed by grief and that of reacting and devoting our time so that the memory of those who lost their lives is remembered with works of man. I have chosen this second path, we are all ready to play our part." Pirozzi stressed the importance of reconstruction, saying it was a "challenge that starts from Amatrice" and will be backed by the whole of Italy, "which is a great country, especially in emergencies".
The mayor gave a big, long hug to Rieti Bishop Domenico Pompili, who officiated.

Pompili said in his homily that "the earthquake does not kill. Men's works kill!". He said that "God must not be used as a scapegoat. On the contrary, we must look in that sole direction as possible salvation. In fact, the question 'Where is God?' must not be asked afterwards, but it must be asked beforehand, and in any case always to interpret life and death".

Earthquake reconstruction must not spur a "political row", Pompili went on.
"It must not bring forms of looting of various kinds, but what it must do is this: revive the beauty which we are guardians of", he said.
Pompili said that "deserting these places would be to kill them a second time". He said that "we live in a green land, a land of shepherds.
"We must invent a new form of presence that safeguards the loving and tenacious force of the shepherd".
Pompili ended his homily by saying "as we glean from a message in poetic form that came to me as well as prayers: 'The voice of Jeremiah the prophet rings out: 'Rachel is mourning her sons and refuses to be consoled, because they are no more'. "We shall not abandon you, man of the Apennines: the shadow of your house will once again play on its native earth. "You will be amazed again by the dawn'." Earlier, at the start of the service, it took Pompili some eight minutes to read out the names of the 37 Amatrice earthquake victims being buried, after which there was a loud round of applause. The altar in the area where the funeral was being held was decorated with a wooden crucifix saved from one of Amatrice's destroyed churches.
Flowers and white balloons were placed on the coffins before Pompili began to celebrate the service.
The large canvas tent structure where the funeral took place was battered by driving rain. People who didn't get into the large tent wore waterproofs and held umbrellas to shield themselves from the elements.

Some 231 people out of the total quake tollof 292 were killed in the Lazio mountain village, which was largely destroyed by the 6.2-magnitude tremor that struck central Italy before dawn on August 24.
Tuesday's state funeral was attended by President Sergio Mattarella, Premier Matteo Renzi, the parliamentary speakers and other dignitaries, as well as trade union leaders.