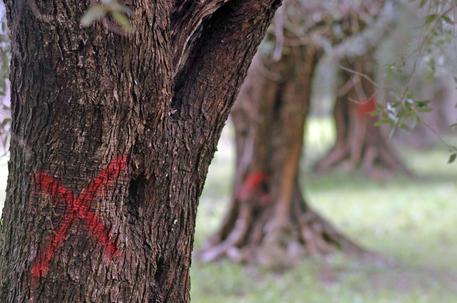 (ANSA) - Brussels, July 22 - The Europan Commission on Friday opened new infringement procedures against Italy over alleged delays in implementing measures to stop the spread of the Xylella fastidiosa bacteria that kills trees. A letter of formal notice was sent to the government on grounds "it is extremely important that Italy fully enacts" measures to stop the spread of Xylella, a commission spokesperson told ANSA.
This is the second infringement procedure to be opened against Italy in relation to Xylella after the EC took issue with its alleged failure to fulfil its obligations in the plan to eradicate the bacteria in December 2015. Xylella was first detected in southern Italy in 2013, marking the first outbreak of its kind in the EU. It reportedly caused about a million olive trees in Puglia to die as of summer 2015.
Italy started chopping down affected olive trees in Puglia in April last year, after the epidemic prompted France to declare an embargo on products from the southern Italian region at risk of infection from the deadly pathogen. However the cull was suspended following an appeal and legal action by environmental associations and Puglia farmers, who said it is excessive.