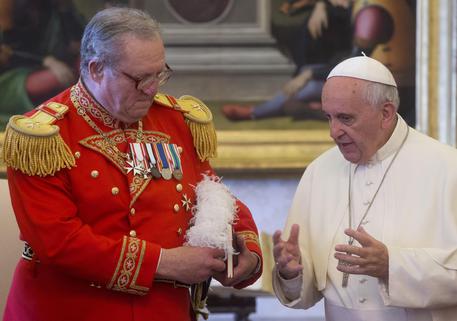 (ANSA) - Vatican City, June 21 - Pope Francis will on Thursday receive in audience Fra' Robert Matthew Festing, Prince and Grand Master of the Sovereign Military Order of Malta, at 10 o'clock in the morning.
The Sovereign Military Order of Malta (SMOM), the smallest sovereign State in the world, runs a large charity-hospital organization around the world, and have recently provided humanitarian aid for countless refugees and migrants.
The Knights of Malta, as they are more widely known, were founded on the Mediterranean in the 11th century as a military religious order like the Templars.
They were removed from Malta by Napoleon.
The Catholic lay religious order, traditionally of military, chivalrous and noble nature, was founded as the Knights Hospitaller circa 1099 in Jerusalem, making it the world's oldest surviving chivalric order.
Headquartered in Palazzo Malta in Rome, its mission is summed up in its motto: "Tuitio Fidei et Obsequium Pauperum"; protecting the Catholic Church and serving those in need.