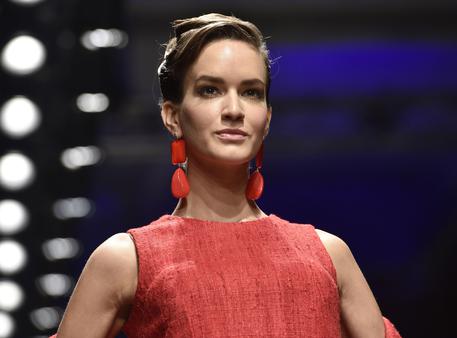 (ANSA) - Milan, May 27 - Raffaella Curiel has partnered with Yizheng Zhao's RedStone Haute Couture group to form a new company, Curiel Ltd., that will focus on high fashion in the Curiel tradition.
"Mr. Zhao defined us as a great diamond in a mountain," Curiel said.
"I would never have accepted to collaborate with anyone else. He's not only a great businessman, but he has a great sensitivity. He understood the treasure of four generations of women in fashion".
The company began in Trieste at the end of the 19th century with the tailoring shop opened by Ortensia Curiel, who was a friend of Italian writer Umberto Saba and a feature of the cultural circles of the time.
Her niece Gigliola, who grew up under her tutelage, opened an atelier in 1945 in Milan during the years of the economic boom and her creations became a must among upper-class Milanese and international aristocracy.
Gigliola was the first Curiel to dress the Scala's opening night performances and to launch the famous "curiellini", simple and sophisticated dresses.
Gigliola's daughter Raffaella learned everything from her mother, and in 1970 opened her own atelier in Corso Matteotti, earning the Ambrogino d'Oro Prize and being named Italian Fashion Ambassador to the World.
The fourth generation, Raffaella's daughter Gigliola, debuted with her line in 1998. She will be the one to design the demi-couture and ready-to-wear collections for the fashion house's new venture, which will be shown on the Milan runway in September.
The joint label has yet to decide whether it will premier its haute couture in Rome or Paris. Curiel said she won't present at Alta Roma in July because she's too busy at the moment.
For Milan Fashion Week in September, however, a show on the historic brand is already in the works, to be set up in the Via Montenapoleone boutique Giada, the brand that brought Mr. Zhao success.
Curiel said Zhao has ambitious plans for the brand, and intends to "position it among the biggest names in high fashion", with plans to open an atelier in Milan by the end of the year and then others in Shanghai, New York, Paris and London.
He said he plans to open five boutiques in 2016, 10 in 2017 and another 10 the year after, with an investment ranging "between five and 10 million euros a year".
"(Italy) has many beautiful family brands, but in a small market. My idea is to bring them to China and make them grow to then come back to Italy and develop throughout the world," he said.