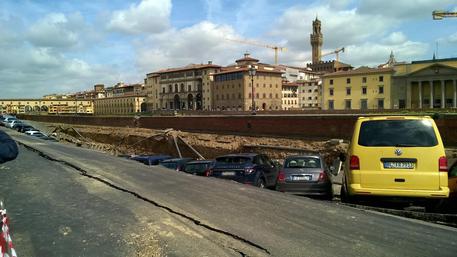 (ANSA) - Rome, May 25 - A 200-metre-long hole opened up in a road running next to the Arno River in central Florence early on Wednesday. "No one is injured, there's just damage - huge damage," said Mayor Dario Nardella after arriving at the site on Lungarno Torrigiani, between the Ponte Vecchio and Ponte alle Grazie bridges.
Around 20 cars parked in the area were taken into the hole.
The residents of two apartment buildings next to it have been told to leave their homes as a precaution, Nardella said.
The mayor said the hole seems to have been caused by a burst water pipe.
"At around 12:30 at night the municipal police were called and they saw that a pipe of the Lungarno aqueduct was broken," he said. "At 1.30 the alarm became serious because a 70-centimetre-diametre pipe burst. The collapse (of the road) took place at 6.14. We have to work out how this breakage caused the collapse".
At 11 a.m. on Wednesday, about 10 metres of additional road surface collapsed into the already-open sinkhole.
Nardella said that buildings were not at risk for collapsing.
The Palazzo Pitti Museum remained closed Wednesday due to a lack of water supply as a result of the collapse.
The Boboli Gardens remained open but with a reduced-price ticket of one euro.