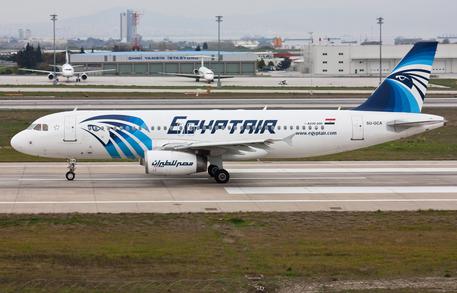 (ANSA) - Rome, May 19 - An EgyptAir flight from Paris to Cairo disappeared early on Thursday with 66 people on board, the airline said. The Airbus A320 went off the radar in the eastern Mediterranean, soon after entering Egyptian airspace. Italian Foreign Minister Paolo Gentiloni confirmed that no Italians were on board the flight. Speaking to Radio Anch'io, Gentiloni also expressed solidarity for France and Egypt. The Egyptian military denied a report from EgyptAir that an SOS signal was sent by the plane shortly before going missing.
There were 56 passengers on Flight MS804 plus 10 seven crew members.
Wreckage of the missing EgyptAir flight 804 heading from Paris to Cairo that disappeared from radar with 66 people on board in the night between Wednesday and Thursday has been found off the Greek island of Karpathos, in Egyptian territorial waters, according to French media.
Egyptian ships are allegedly converging to the area where the wreckage of the Airbus A320 was located, in the Aegean Sea between Rhodes and Crete, French media report.
According to airport sources quoted in the reports, the aircraft was flying in Egyptian air space when, at 12:29 am, it ''disappeared from Greek radar''.
The captain of a Greek merchant vessel off Karpathos was first reported as seeing a ''flame in the sky'' tonight.