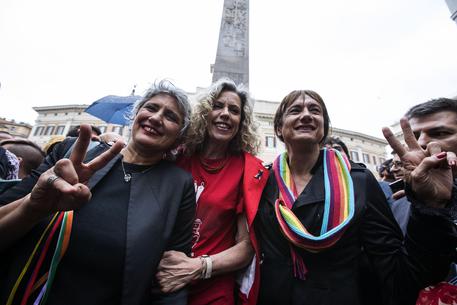 (ANSA) - Rome, May 11 - The Lower House on Wednesday gave its definitive approval to the government's civil unions bill, making it into law with 372 votes in favor, 51 against, and 99 abstaining. The vote was greeted by applause from Premier Matteo Renzi's Democratic Party (PD) lawmakers in the chamber and from activists waiting outside the buildings.
The government earlier won a Lower House confidence vote on the bill by 369 votes to 193 with two abstentions. The brand-new law extends to committed gay couples some of the same rights and protections currently enjoyed by heterosexual married couples, such as the right to receive a deceased partners' pension. It will fill a legislative vacuum, as Italy is the only western European country not to have either legalised gay marriage or recognised civil unions between same-sex couples.