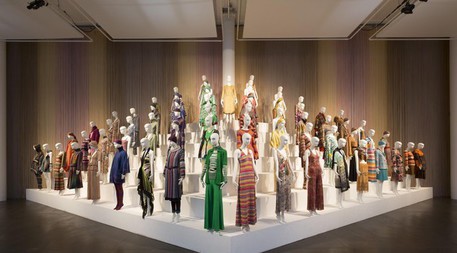 (ANSA) - London, May 4 - A tale of success, creativity and love was told by Rosita Missoni, who is over 80 but still full of life, when she talked about the Missoni fashion house at Wednesday's inauguration of a new exhibition on the well-known Italian brand.
'Missoni Art Color' will be at London's Fashion and Texile Museum until September 4. A major event for London, halfway between fashion and culture, the exhibition debuted last year at the Gallarate MA*GA. A delegation from the Missoni family attended the inauguration led by Rosita, who was the lifelong and career-long companion Ottavio 'Tai' Missoni before becoming his widow. A meeting with the media was a chance to discuss memories: that of the love between Tai and Rosita that began in London in 1948, when the 27-year-old refugee from Dalmatia was taking part in the first Olympics of the postwar period in the 400-meter event and the 16-year-old Rosita was on a school trip.
The love was to be consecrated in marriage and a few years later in a Varese entrepreneurial adventure that would later become international.
The exhibition was curated by Luciano Caramel, Luca Missoni and Emma Zanella and organized by MAGA alongside FTM and the Archivio Missoni, with support from The Woolmark Company. Some 40 works by twentieth-century European artists are presented - from Gino Severini to Lucio Fontana and Sonia Delaunay - who influenced and inspired the long journey into color and with attention to detail that was conducted by the couple. Next to the paintings are a selection of outfits created by Rosita beginning in 1953 and Angela Missoni from 1997, as well as previously unseen sketches, paintings and tapestries left by Tai.
Fashion and Textile Museum director Celia Joicey said that the exhibition is important as it ''shows the creative process through which clothing becomes fashion''.
Luca Missoni, director of the family archive, added that ''wool has been such an essential element of our work that it has practically become synonymous with Missoni.''