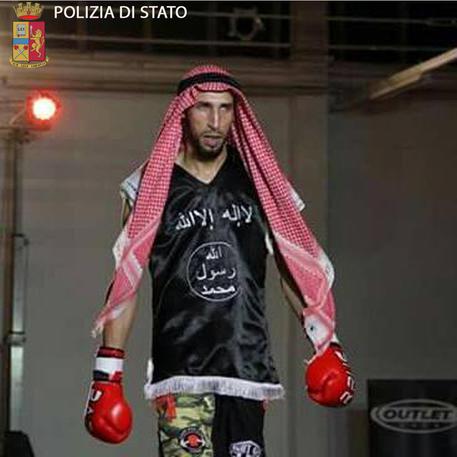 Italian police have arrested four people in a foreign fighter investigation, including a Moroccan-born man living in Italy with orders from the so-called Islamic State (ISIS) terror group to carry out attacks in Rome during Holy Year, prosecutors said Thursday. The man allegedly received a message urging him to commit terror attacks in Italy, investigators said. "Dear brother Abderrahim, I send you... the bomb poem... listen to the sheik and strike," was the content of a WhatsApp message to arrested suspect Abderrahim Moutahrrik, the investigators said. The sheik in question may be a reference to ISIS leader Abu Bakr al-Baghdadi, who is usually called caliph, or to another ISIS sheikh, experts said.

Milan prosecutor Maurizio Romanelli told reporters that investigators intercepted the communication from within ISIS-held territory. There was no indication any attacks were imminent and Romanelli said authorities acted quickly to close the investigation, arresting four people and issuing arrest warrants for two others believed to be in ISIS territory.

"This is a new profile, because it was not a generic indication, but an indication given to a specific person who was invited to act within the territory of the Italian State," Romanelli said.

Authorities arrested Moutahrrick and his wife Salma Bencharki, who allegedly were planning to travel from their home in Lecco, north of Milan, to ISIS-held territory with their children aged two and four. Romanelli said Moutahrrick had taken Italian citizenship and was an accomplished boxer.

As well, investigators said Moutahrrick planned to attack the Israeli embassy and the Vatican in the nation's capital. "I want to hit Israel in Rome," he told fellow arrested suspect and Moroccan national Abderrahmane Khachia in a tapped February 6 conversation. Investigators say Moutahrrik said he contacted an Albanian national in order to obtain weapons and that he specifically said he planned to attack the Israeli embassy in Rome.

"For these enemies I swear if I manage to bring my family to safety, I swear I will be the first to attack (...) in this crusading Italy (...) the Vatican with the will of God," Moutahrrik told Koraichi in a March 25 audio message. "My only request to you is my family, you know I want (...) my children to spend some time growing up in the Islamic caliphate".

Khachia, 23, was arrested in the northern city of Varese, prosecutors said. Prosecutors also issued arrest warrants for an Italian-Moroccan couple who left to join ISIS last year with three small children. Romanelli said that man, identified as Mohamed Koraichi, had become an ISIS fighter and had communicated the orders to carry out attacks in Italy while making arrangements for the other family to join the terror group. The fourth arrest was of Koraichi's sister, prosecutors said.