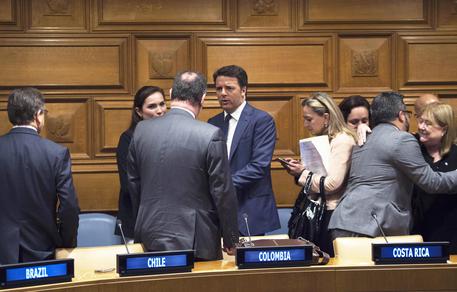 (ANSA) - New York, April 22 - Premier Matteo Renzi has stood up for European Central Bank President Mario Draghi after the Italian official hit back hard at criticism from Germany of his monetary policy for the eurozone.
"Draghi enjoys the confidence and esteem of all the European countries," Renzi said at the United Nations in New York after a series of bilateral meetings to promote Italy's bid for a non-permanent Security Council seat. On Thursday Draghi said "certain criticism" directed at the ECB's policies under him threatened the independence of the central bank and he stressed that its mandate was to serve the whole eurozone, not just Germany. This seemed to be a response to comments by Germany finance minister, Wolfgang Schäuble, who had said the ECB's record low, zero interest rates were causing "extraordinary problems" for German banks and pensioners and could fuel Euroskepticism.