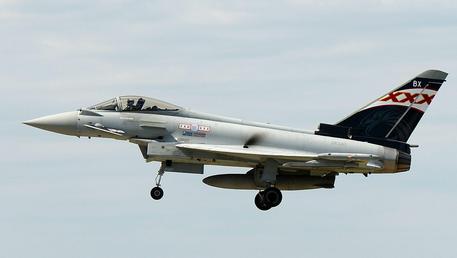 (ANSA) - Rome, April 5 - Italian defence giant Finmeccanica on Tuesday signed a contract to supply 28 Eurofighter Typhoons to Kuwait on the basis of an inter-governmental accord with Italy. It is the biggest contract ever signed by Finmeccanica, believed to be worth between three and four billion euros. The exact worth of the deal has not been released but Finmeccanica is said to be counting on just under 50% of a 7-8 billion-euro contract. "This is Finmeccanica's largest ever commercial achievement", said Mauro Moretti, Finmeccanica CEO and General Manager. "It is an outstanding industrial success with significant benefits, not only for our company and the other Eurofighter consortium partners, but also for the entire Italian aerospace industry. The contract will support expertise and skilled jobs at Italian small and medium-sized security and defence companies." In a statement, Finmeccanica said "the Kuwait Ministry of Defence and Finmeccanica, which leads commercial activities in Kuwait on behalf of the Eurofighter consortium, today signed a contract for the supply of 28 Eurofighter Typhoon aircraft, to be produced in Italy. "The contract, part of an intergovernmental agreement between the two countries, was signed in the presence of the Italian Defence Minister Roberta Pinotti and her Kuwaiti counterpart, H.E. SHAIKH Gen. Khaled Al Jarrah Al Sabah.
"The contract signed by Finmeccanica includes logistics, operational support and the training of flight crews and ground personnel, which will be carried out in cooperation with the Italian Air Force. The contract also provides for the upgrade of ground-based infrastructure in Kuwait which will be used for Typhoon operations.
"The Eurofighter Typhoon for Kuwait, which will be provided in its most advanced configuration, will be equipped with the cutting-edge new E-Scan radar (Electronically Scanned array radar). The radar is developed by the European EuroRADAR consortium which is led by Finmeccanica.
"The contract with Kuwait was signed following a thorough flight and technical evaluation of a number of competing aircraft in the same category. It is part of a wide-ranging partnership between the Italian Ministry of Defence and the Kuwait Ministry of Defence, which will continue to strengthen cooperation between the two nations and other European members of the Eurofighter consortium (the UK, Germany and Spain).
Finmeccanica is the leading industrial group in the high-technology sector in Italy and one of the main global players in aerospace, defence and security. It operates in five sectors: aeronautics, helicopters, electronics, defence systems and space. The company is partially owned by the Italian government through the economy ministry, which holds 30.204% of Finmeccanica's shares.