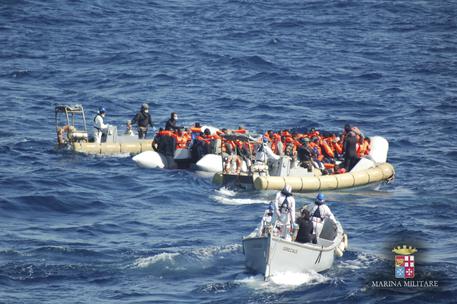 (ANSA) - Geneva, March 30 - Italy is in the front line in the refugee crisis and has saved hundreds of thousands of lives in the Mediterranean, 3,700 in the last five days alone, Foreign Minister Paolo Gentiloni said Wednesday at the UN's High-Level Conference on Syrian refugees. Addressing the one-day conference in Geneva, Gentiloni illustrated Italy's initiative of humanitarian corridors, "which can be an initiative that can be emulated by other countries". As for Syrian refugees in particular, Gentiloni said Italy had agreed to take 1,500 more people by the end of 2017 within the framework of the ongoing EU-funded reception programme, as well as facilitating visas for families to reunite. The EU has agreed a 'one in, one out' programme with Turkey to return new Syrian arrivals from Greece, with Ankara taking back one economic migrant for every refugee whose asylum claim is recognised.
UN Secretary General Ban Ki-moon told the Geneva conference more needs to be done to provide resettlement and other answers for their plight. "We are here to address the biggest refugee and displacement crisis of our time...This demands an exponential increase in global solidarity," he told the gathering at the Palais des Nations in Geneva, attended by the representatives of 92 countries together with governmental and nongovernmental organizations.
Some 4.8 million Syrians have been forced to flee across borders by five years of war, while another 6.6 million are internally displaced. While talks are underway to find lasting peace, the UN chief said more countries need to step up and provide solutions for Syrian refugees.