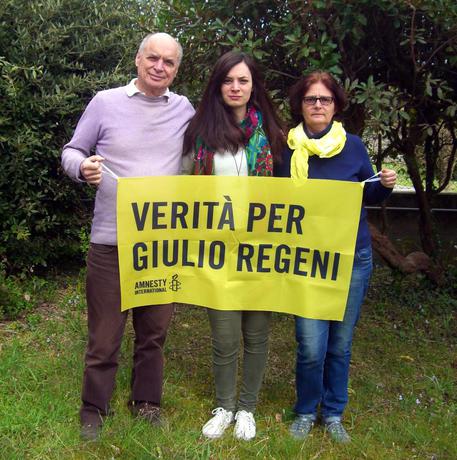 (ANSA) - Rome, March 25 - The Italian government is closely monitoring the torture and murder case of Italian student Giulio Regeni in Egypt and is determined to make sure the investigation sheds full and unequivocal light onto the circumstances of his death, sources at Premier Matteo Renzi's office said Friday.
As Foreign Minister Paolo Gentiloni insisted "we want the truth", Regeni's parents said they were "sure" the government would react to an "outrageous set-up" - referring to last night's statement from the Egyptian interior ministry that it has recovered Regeni's passport and evidence that he was kidnapped by an Egyptian criminal gang of five, all of whose members were killed in a police shootout on Thursday.
Italian investigators in Cairo said the case is far from closed.
"There is no definitive element confirming they were responsible," the Italian investigators said, adding Egypt has yet to pass on crucial investigation data to Italy.
They also pointed to inconsistencies in Egypt's latest version of what happened to Regeni. First, kidnappers would be unlikely to hold on to compromising evidence such as a victim's passport for months after the victim's death. Second, kidnappers would be unlikely to torture a victim over the course of a week - as Regeni was - if their only purpose was to obtain a ransom.
Third, it is not credible that an entire gang of alleged kidnappers was killed by police, thereby preventing any possibility of getting corroborating statements from any of them.
Rome Chief Prosecutor Giuseppe Pignatone said the new evidence supplied by Egyptian authorities didn't prove anything.
"The Rome prosecutor's office believes that the elements thus far communicated by the Egyptian prosecutors to the team of Italian investigators present in Cairo are not fit to shed light on the death of Giulio Regeni or to identify those responsible for the murder," he said. The Rome prosecutor's office therefore believes that is it "therefore necessary for the investigation to proceed, as is shown also by the statement just issued by the Egyptian interior ministry" and Rome prosecutors "are waiting for the Cairo prosecutor general to transmit the information and evidence, for some time requested and urged, and other (material) that will be requested as soon as possible concerning what has been suggested to our investigators".
The parents of Giulio Regeni told ANSA they were "wounded and embittered by the umpteenth attempt at a cover-up on the part of the Egyptian authorities" and they were "certain of the firmness with which our government will react to this outrageous set-up". They noted that their son was "barbarically" killed after being "abducted in Cairo exactly two months ago, after which his body was discovered after eight days of torture".
Regeni's parents went on: "we are certain of the firmness with which our government will react to this outrageous set-up which, furthermore, cost the lives of five people, just as we know that the institutions, our prosecutors and individual citizens will not leave us alone to ask and demand truth. That is owed not only to Giulio but to the dignity of this country".
The Cambridge doctoral researcher's burned and mutilated body was found in a ditch on the road to Alexandria on February 3, nine days after he disappeared on January 25, the heavily policed fifth anniversary of the uprising that ousted former strongman Hosni Mubarak.
"We must continue digging and following our leads to find definitive evidence and eliminate doubt," Italian investigative sources said.
The Egyptian interior ministry said in last night's statement that Regeni's passport was found in the home of the sister of one of the deceased alleged gang members, named as Tarek Saad Abdel Fatah, 34.
The alleged criminal gang posed up as cops to kidnap foreigners, the ministry said. Police searched the home of the sister of the suspected ringleader because "investigations uncovered evidence he went to see her from time to time", the ministry said. She lives in the Nile Delta north of Cairo, it said.
"Security forces have finished their investigation and apprised the Italian side of the results," the ministry said.
"We thank the Italian side for its full cooperation...(which) contributed to this result," Egyptian news agency MENA cited the ministry as saying on Thursday.
The sister and the wife of the alleged kidnap gang leader said Regeni was killed while resisting a robbery, Egyptian national prosecution sources told ANSA on Friday. The two women named as sister Rasha Saad Abdel Fatah and wife Mabrouka Ahmed Afifi "confirmed the suspect committed the act in order to rob (Regeni), not kill him," the sources said. "The victim resisted, which prompted the accused and his fellows to attack him, causing his death".
The head of the allaged kidnapping gang had a fake ID document showing him to belong to the Egyptian security forces, the MENA news agency said Friday, citing an interior ministry statement. "A fake interior ministry ID document bearing the name Tarek Saad Abdel Fatah issued by the department of general security" was found during a search in the suspected leader's home in the Sharqiyya area, it said.
On Friday evening Foreign Minister tweeted that Italy was insisting to get at the truth about Regeni's torture and murder.
"#Regeni Italy insists: we want the truth," the minister tweeted. Egyptian government critics and human rights organisations have suggested Regeni was tortured and killed by a security-forces cell because of his research work with the trade union movement and the opposition, like many others. Regeni's body had signs of torture all over it, including cigarette burns, multiple fractures, cuts under the soles of the feet, clipped ears, a torn fingernail and a torn toenail.