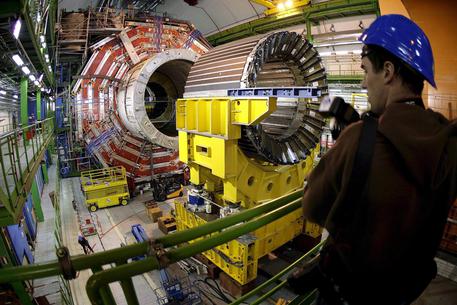 (ANSA) - Milan, March 25 - The European Organization for Nuclear Research (CERN) particle physics lab's Large Hadron Collider (LHC) restarted after a three-month technical pause, Italian physicist Mirko Pojer, who is responsible for the LHC's superconductor circuits, said Friday. Scientists have injected 10 billion protons into its 27-kilometer tunnel. The LHC is the world's largest and most powerful particle collider, and the largest single machine in the world. It was built by CERN between 1998 and 2008 in a bid to prove the existence of dark matter.
The visible universe - the planets, stars, and galaxies - is made up of atoms or 'baryonic' matter, which makes up less than less than 5% of the total mass of the universe.
The rest seems to be made of a mysterious, invisible substance called dark matter (25%), plus a force that repels gravity known as dark energy (70%).
CERN scientists have been trying to prove the existence of the actual particles of dark matter by attempting to create them at the lab's LHC.
Understanding what dark matter is made of may be one of the biggest scientific challenges ahead this year, according to Italian physicist and CERN director Fabiola Gianotti The 53-year-old Rome native who participated in the discovery of the Higgs boson is the first woman in the post since the particle physics lab was founded in 1954.