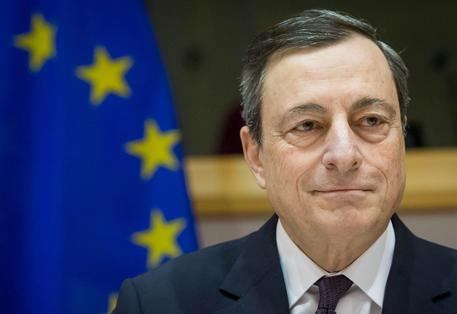 (ANSA) - Rome, March 24 - The European Central Bank (ECB) warned Thursday that countries with high debt levels such as Italy remained exposed to volatility on the money markets.
"Countries with high debt levels are particularly vulnerable in the event of renewed financial market instability, given the still strong fiscal-financial nexus," the ECB said in its economic bulletin. "Moreover, their capacity to accommodate potential adverse shocks is rather limited". Italy has a massive public debt of over two trillion euros, more than 130% of GDP. The ECB pointed out in the bulletin that the European Commission recently identified eight eurozone countries, including Italy along with Belgium, Ireland, Spain, France, Portugal, Slovenia and Finland, as being "exposed to high medium-term fiscal sustainability risks, mainly on account of their elevated government debt levels and/or high implicit liabilities".

Economic recovery in the eurozone is continuing but at a slower rate than expected, the European Central Bank (ECB) said in its monthly bulletin published on Thursday.
"The economic recovery in the euro area is continuing, albeit with lower than expected growth at the beginning of the year on the back of a weaker external environment," the bank said.
"Looking ahead, the economic recovery is expected to proceed at a moderate pace," it added. "Domestic demand should be further supported by the ECB's monetary policy measures and their favourable impact on financing conditions, as well as by continued employment gains from past structural reforms," the bank continued. "Overall, insufficient demand remains the single most important factor holding back services business at the euro area level, but other factors play a role at country and sub-sectoral level," the ECB said.
"For example, factors limiting services business that are reported comparatively often by market services firms are financial constraints in Italy and shortage of labour in Germany," it added.
The ECB also noted the significant appreciation of the euro exchange rate over the three months under review. "The euro appreciated markedly in effective terms between early December2015 and mid-February 2016 amid the increase in global uncertainty," the bank said. "In bilateral terms, the euro appreciated by 3.4% against the US dollar over the same period" while "uncertainty surrounding the United Kingdom's referendum on EU membership weighed on the pound sterling, resulting in the euro appreciating by 9.3%". The euro also appreciated strongly against the Russian rouble, the Chinese renminbi and the currencies of emerging market economies and commodity-exporting countries, the ECB continued. "Higher volatility and the decline in risk appetite supported the Japanese yen, leading to a euro depreciation against the Japanese currency by 5.4%," it said.