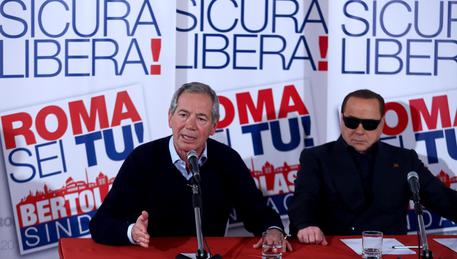 (ANSA) - Rome, March 24 - Centre-right Rome mayoral candidate Guido Bertolaso on Thursday joined a chorus of criticism of European Union High Representative for Foreign Affairs Federica Mogherini for breaking down in tears Wednesday while talking about the Brussels terror attacks.
Bertolaso was echoing criticism from his rightwing rival for Rome mayor, Giorgia Meloni, who on Wednesday said she was "ashamed" of Mogherini and called her "a symbol of a soft Europe".
Bertolaso said "I find it embarrassing that the EU foreign minister should start crying after an attack like that: the minister, like all the European Commission, should demonstrate that we aren't afraid and we won'te be intimidated".
Bertolaso, who had come under fire for saying Meloni should not stand because she is pregnant, added that "I'll be accused of being sexist again but I agree with Meloni...it was an embarrassing scene because Europeans want to be reassured by their leaders". Several members of the ruling centre-left Democratic Party (PD) said they were "proud" of Mogherini for "showing humanity".
Berlusconi is the mayoral candidate of former premier Silvio Berlusconi's centre-right Forza Italia party.
Meloni is backed by her own small rightist Fratelli d'Italia (Brothers of Italy) party and by the rightwing populist Northern League party, the top party on the centre right.