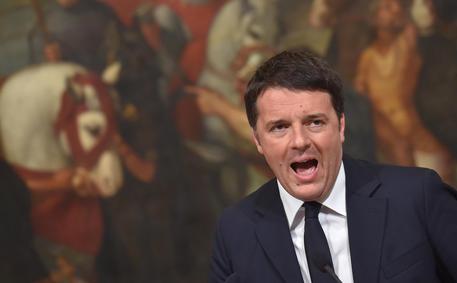 (ANSA) - Rome, March 22 - Italian Premier Matteo Renzi on Tuesday called for a common EU security policy after Brussels terror attacks, claimed by ISIS, that killed at least 34 people.
Pope Francis condemned what he called the "blind violence" of the attacks.
Renzi stressed that the early-morning Islamist terrorist attacks had come from within.
"Belgium has been hit, the capital and heart of the European Union," Renzi said.
"It is time to say without mincing our words: the attackers came from within the places that were hit - the threat is global but the killers were also local killers".
In order to beat Islamist terrorism "the EU should go all the way - a unified security and defence structure is needed," Renzi said.
"Those offering miracle solutions don't realise how long-lasting this situation will be," the Italian premier went on.
"Those who fool themselves by saying 'let's close the borders' don't realise that the enemies are already within our cities". The rage in the wake of the attacks must be used constructively to defeat Islamist extremism, Renzi continued.
"Now is not the time for impulsive reactions," he said. "We need to stay calm but we need all our rage, we need (to channel it) into a reaction that can become a project that can face down and destroy Islamist extremism and (its) deranged trail of death," the premier said.
"The terrorists struck at the locations of daily life, following a sad script that has generated other attacks," Renzi said, expressing Italy's "brotherly condolences to the people of Belgium for the terrible attack".
"Our countries are united by a historic relationship of deep friendship and today's tears bring us even closer together," the premier said.
"Our sympathies are with the families of the victims, their pain which began today and will never end, with the wounded".
Earlier, Renzi called Belgian Premier Charles Michel to convey Italy's condolences.
Renzi also said that Italian officials is busy verifying the conditions of three Italian nationals who were reported injured in the attacks.
Pope Francis condemned the attacks as "blind violence" in a telegram to the Archbishop of Mechelen-Brussels, Jozef De Kesel.
"Having learned of the attacks in Brussels, affecting many people, His Holiness Pope Francis entrusts the deceased to God's mercy and joins in prayer in the suffering of their relatives," read the telegram sent by Vatican Secretary of State Pietro Parolin on the pope's behalf. "He expresses his deepest sympathy for the injured and their families, and all those who contribute to the rescue operations, asking the Lord to bring them comfort and consolation in their ordeal. "The Holy Father again condemns the blind violence which causes so much suffering, and imploring of God the gift of peace, he invokes for the bereaved families and the Belgian people the consolation of divine blessings".
The Islamic Cultural centre of Italy (CICI), which runs the Rome Mosque, also condemned the attacks.
CICI Secretary-General Abdellah Redouane said in a statement that "attempts on human life are not acceptable for Islam and Muslims" and urged everyone to "pray for them and invoke Allah the Most High and Omnipotent to bestow His Grace and His peace on all humanity".
He said terrorism was "against all religions".
Redouane also condemned all "silence towards these tragedies and instead we need to support those who have always been in the front line for dialogue between religions and for the promotion of the principles of pluralism and respect for freedom".
Defence Minister Roberta Pinotti was among the many Italian political heavyweights to express their solidarity with the victims of the terrorist attacks.
"Pain and mourning for the victims of the terrorist attacks in Brussels," Pinotti said in a post to her Twitter account. Health Minister Beatrice Lorenzin also entrusted her feelings to Twitter.
"Their pain is my pain, our pain," she wrote.
"Only a united and caring Euriope can defeat the ills of our time." Her thoughts were echoed by ex president of the republic Giorgio Napolitano, who described the attacks as an "insult to the unity and freedom of Europe".
"They must become motivation not only for waging a common and boundless battle against international terrorism, but also for highlighting fully and with absolute determination those conquests of the European construction that we have let be scorned by those who deny them and obscured in the memory and conscience of too many citizens of our Europe," Napolitano said.
Susanna Camusso, leader of Italy's biggest trade union federation CGIl, called on "diplomacy and peace" rather than weapons to speak in response to a "new series of attacks". Ex civil protection chief and centre-right mayor candidate for Rome Guido Bertolaso also made an appeal for peace.
"These actions are not just the result of madness but also of the incapacity to manage complex problems on a global level," he said. "What is happening in Syria did not come about by chance … bulldozers don't lead anywhere," Bertolaso continued. "I fear the problem of these attacks has also been caused by a series of bulldozers, metaphorically speaking. This is the lesson of history. Barbed wire, repression and canon fire have never improved mankind," he added. "Europe is burning under the fire of Islamic fundamentalism and the government appears not to notice: (Premier Matteo) Renzi, (Interior Minister Angelino) Alfano and (President Sergio) Mattarella tell us terrorism must be fought with culture but it is a phrase that is good for (wrapping) chocolates," said Bertolaso's right-wing rival for mayor, Brothers of Italy (FdI) president Giorgia Meloni, possibly alluding to the notes of love and friendship that are used to wrap Perugina's Baci chocolates.