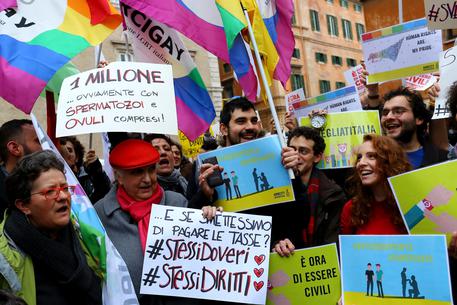 (ANSA) - Rome, March 21 - A Rome family court has authorised a fresh stepchild adoption, namely the adoption by one partner in a same-sex union of the other partner's biological child, sources said Monday.
The ruling concerns the three-year-old child of a gay couple who was conceived and carried by a surrogate mother in Canada for no fee. The two fathers married in Canada and have travelled to the North American country with the child to visit his mother. The fathers have been in a stable relationship for 12 years and their respective families are supportive of the child, reports said.
Judge Melita Cavallo, who issued her verdict before retiring in January, ruled that stepchild adoption was in the child's best interests and amounted to one of the "special cases" provided for by existing adoption laws.
The ruling is definitive.
Last month the Democratic Party (PD) of Premier Matteo Renzi was forced to drop a controversial stepchild adoption clause from a bill introducing civil unions for same-sex couples due to opposition from conservative Catholics in his left-right government coalition, as well as from within his own party.
The bill subsequently cleared the Senate at first reading and must now be approved by the Lower House in identical form in order to pass into law.
"This umpteenth verdict sounds like a reproof of parliament," said Gabriele Piazzoni, the national secretary Arcigay LGBT organization. "One after the other the courts...are extending parenthood within gay and lesbian couples with children, regularising situations which would otherwise be harmful for the children involved," he continued. "And it is precisely the supreme interest of the minor that our parliament failed to place at the centre when the civil unions bill reached the Senate," Piazzoni added. Earlier this month a Rome family court recognised the 'cross-adoption' of three children by two mothers in a lesbian relationship.
The PD has said it will introduce stepchild adoption in a separate reform of Italy's slow-moving and restrictive adoptions system before the end of the current legislature.