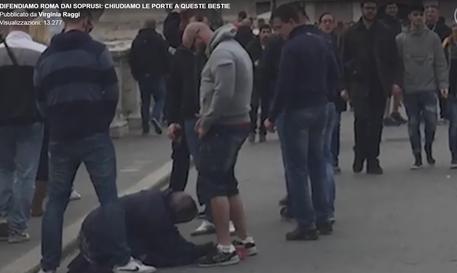 (ANSA) - Rome, March 18 - A video that is doing the rounds on the Internet showing soccer fans - presumably followers of Czech side Sparta Prague - urinating on a Rome beggar sparked outrage in Italy on Friday.
The video of the incident on the beautiful Ponte Sant'Angelo bridge by one of Rome's most famous monuments, Castel Sant'Angelo, appeared to have been shot before Sparta beat Lazio 3-0 on Thursday to qualify for the Europa League quarterfinals 4-3 on aggregate.
It comes after several incidents in the past of visiting fans committing vile acts and causing mayhem in the Italian capital.
One of most famous occurred last year, when big crowds of fans of Dutch side Feyenoord fans got drunk in central Rome and inflicted damage on the historic Barcaccia fountain near the Spanish Steps.
"I'd like it if those so-called fans of Sparta Prague who urinated on a beggar and had the courage to immortalise themselves on Youtube never again set foot in an Italian stadium, starting with the (Stadio) Olimpico (in Rome)," said Roberto Giachetti, the candidate to be Rome mayor in June's local elections for Premier Matteo Renzi's Democratic Party (PD).
"I hope that they are identified as soon as possible.
Soccer cannot be an excuse to come to Rome and commit abominable acts". Virginia Raggi, the mayor candidate for the anti-establishment 5-Star Movement, said the incident was a breach of human rights and said that, if she won, the M5S would take action to ensure "the doors of the city are closed to these beast fans".