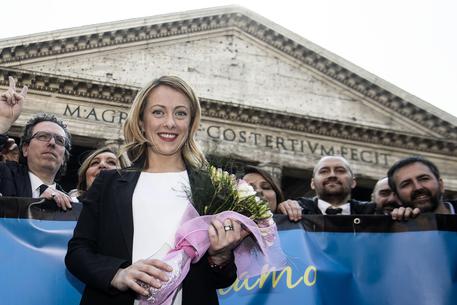 (ANSA) - Rome, March 16 - The decision on Wednesday by Giorgia Meloni, the pregnant leader of the small, right-wing Brothers of Italy (FdI) party, to run for Rome mayor in June's local elections highlighted current dissention between right-wing and centre-right parties in the quest to govern the nation's capital city.
Her decision means the centre right may well be divided in the local elections as ex-premier and Forza Italia leader Silvio Berlusconi said earlier on Wednesday that he was sticking by the candidacy of former civil protection chief Guido Bertolaso - and Bertolaso himself then said he would keep going "like a bulldozer" despite Meloni's run. Northern League leader Matteo Salvini has said he will back Meloni. Meloni appealed to both Salvini and Berlusconi to help her beat the anti-establishment 5-Star Movement (M5S).
"I want to make an appeal to Salvini, to Berlusconi, and all the centre-right field: help me not to leave Rome to the M5S, let's win together, we can," she said. "I'm not interested in the leadership of the centre right but in the Romans," she said.
After Meloni announced she was running, Bertolaso said that he was not dropping his candidacy.
"I'm not pulling out. I'm going to keep going like a bulldozer," he told RAI radio. "Politicians make their mind up one day and change it the next," he added, when asked if he felt betrayed by Meloni after the FdI had initially said it would back him, along with Berlusconi's Forza Italia and Salvini's Northern League.
"I'm not a politician, but a technocrat. It was those three who asked me to stand and I did".
Berlusconi and Bertolaso fed a row when they said earlier this week that Meloni should not run because she is pregnant.
"I believe a woman has to choose freely; no man can tell a woman what she must do or not do," Meloni said.
"That's why I've chosen to run, even though I'm pregnant.
And Rome has as its symbol a she-wolf nursing twins," she said.
"I would have preferred to enjoy the most beautiful months for a woman in another way, but I always thought that if there wasn't a better option my candidacy would be in the field".
"The people who think a mother can't be mayor aren't just two, they are many, we need to fight a mentality".
Meloni said if she wins, her administration won't be overshadowed by that of ex-rightwing mayor Gianni Alemanno, who has been indicted in the so-called Rome Mafia corruption case and who was a member of her party. "The Romans know there's no relationship with Alemanno, who is founding a new movement," Meloni said.
"There will be a discontinuity with the errors of the past".