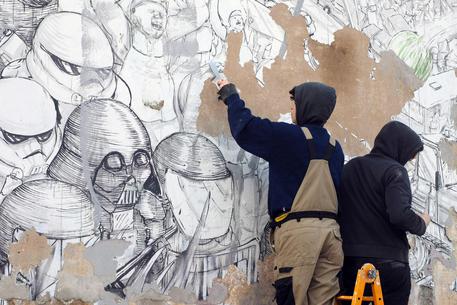 (ANSA) - Rome, March 16 - French daily Le Monde on Wednesday published an article on the protest by Blu, a street artist who this week systematically painted over 20 years' worth of his public work in Bologna in a demonstration against a museum show on street art set to open there tomorrow.
Blu, named by The Guardian in 2011 as one of the world's top 10 street artists, covered his work with gray paint to protest against the commercialisation and the 'museumification' of his work, some of which will be on display without his authorisation in the show "Street Art: Banksy & Co." at Bologna's Palazzo Pepoli.
The show was organised by Fabio Roversi-Monaco, president of the city's Genus Bononiae museum group, with the Carisbo bank Foundation, and includes 250 works, some of which were removed from their original locations on various city walls.
Organisers said the aim of the show is "to start a reflection on how to save, conserve, and display these urban experiences in museums".
On his blog, Blu wrote: "there's no more Blu in Bologna" and linked to a protest article at the Wu Ming Foundation website, which called Blu's protest "action against the rich and powerful who take street art off the street".