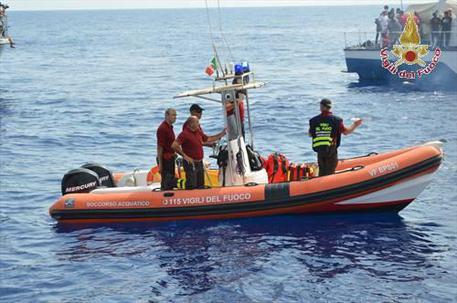 (ANSA) - Rome, March 10 - In a year immigration has become the principal challenge facing the EU, followed by terrorism, which has surpassed in less than a year the problems linked to the economic crisis, a poll confirmed Thursday.
In all 69 % of Italians favour the EU dealing with the migrant crisis through a common policy, but nearly a half (46%) believe that Italy shouldn't help refugees and 49% also view with suspicion foreign citizens who move into Italy.
This is the picture snapped by Eurobarometro, the European poll on citizens' opinions carried out in November 2015 (after the climax in the summer of the migrants' crisis on the Balkan route but before the Paris attacks) that was presented today by the European Commission in Rome.
Some 50% of Italians, in addition, don't feel themselves European citizens and 63% are convinced that Italy's interests are not taken into consideration in Brussels.
Europeans as a whole acknowledge that the EU has made achievements with 49% saying the most important is free movement of labour, the possibility to travel study or work anywhere in the EU - an advantage that Italians say is second most important (36%) after the primacy of the euro (41%).
European Commission Representation in Italy director Emilio Dalmonte says the fact that half of Italians feel they don't have to help migrants is a figure that "maes one reflect".
"The images that arrive from Idomeni are no different to those of the homeless 70 years ago in our country," he said, underlining that the figures are comparable to those in eastern Europe where people traditionally are more skeptical toward refugees, such as Hungary, the Czech Republic and Slovakia.
According to Mario Morcellini, lecturer at the La Sapienza university in Rome, the media are largely to blame "and especially talk shows responsible for anti-politics and the worsening" of public opinion aggravating Italians' perceptions on immigration well beyond the real entity of the phenomenon.