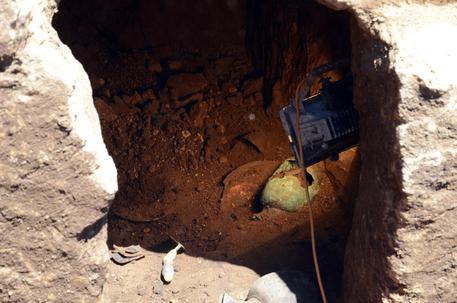 (ANSA) - Milan, March 8 - Excavations of a tomb in northern Lazio dating to around the 8th century BC have uncovered treasures including an amber necklace, a golden Egyptian scarab amulet and rare pottery that archaeologists say likely belonged to an Etruscan princess.
The excavation of the Tomb of the Golden Scarab follows its discovery earlier this year in the archaeological site of Vulci, a former Etruscan city.
Anthropological research helped back the theory that the tomb belonged to a princess within the ranks of the nascent Etruscan aristocracy. A few bones wrapped in precious cloth are all that remains of her.
The excavation of the tomb was carried out in the laboratories of the Vulci foundation in Montalto di Castro near Viterbo.
A group of international archaeologists are set to begin a new digging campaign at the Vulci site in April.