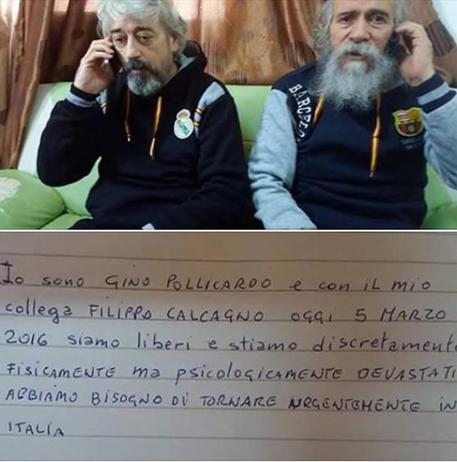 (ANSA) - Rome, march 4 - Italy's two remaining hostages in Libya, Gino Pollicardo and Filippo Calcagno, have been freed, Pollicardo's family confirmed Friday. His son said "It's over" while his wife said "I heard from him in the phone". The two workers for the Parma-based Bonatti oil-construction firm are in the hands of local police and will soon be moved to a secure zone where they will be picked up by Italian agents who will take them back to Italy, intelligence sources said. The foreign ministry said it was verifying the circumstances of the liberation. Meanwhile the slaying in Sabratha late Wednesday of two other Bonatti workers taken hostage in July, Fausto Piano and Salvatore Failla, appears to set the stage for an Italian military commitment in Libya, on which the US appears to be pushing via its ambassador in Rome, John Phillips, who said Italy could take the lead of an international intervention in support of the Libyan government and deploy up to 5,000 men.