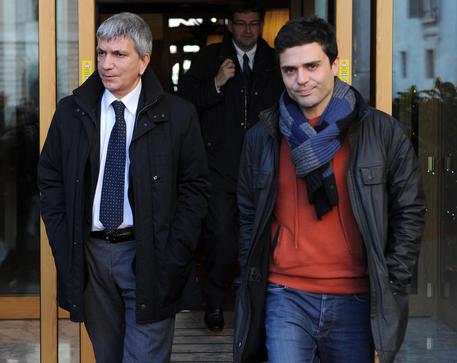 (ANSA) - Rome, February 29 - The arrival of a child via an American surrogate mother for former Puglia governor and leftwing Left, Ecology and Freedom (SEL) leader Nichi Vendola and his younger partner has fuelled a row in Italy over adoptions for members of the LGBT community.
Tension over the issue of gays adopting children continued on Monday even though a provision that would have allowed homosexuals to adopt their partners' biological children was stripped from a bill regulating civil unions last week. Part of the reason that the issue has flared again was the birth in California at the weekend of Tobia Antonio, the child of Vendola and his 20-year-younger partner Ed Testa thanks to a surrogate mother. Northern League leader Matteo Salvini blasted Vendola, accusing him of "disgusting selfishness". Premier Matteo Renzi's centre-left Democratic Party (PD) is set to propose new legislation on adoptions, including those by gay parents, after the stepchild adoption provision was dropped to allow the civil unions bill to clear the Senate last week. But Interior Minister Angelino Alfano has said this would breach a pact that his centrist AP group reached with the PD to win its support.
"The pact between us was clear," said Alfano, whose party is a junior partner in the ruling coalition. "Scrapping adoptions does not just go for this bill, but in general," added that minister, who last week said his party had stopped the civil unions bill being a "revolution against nature".
"We would never have voted for the law if we'd been told that dropping stepchild adoption was provisional in view a new law.
"We are absolutely intransigent on this".
Renzi replied indirectly by saying that "the time of vetoes" to needed reforms - such as the civil unions bill now before the Lower House - is over. "I wish to tell the opposite extremes that the time when someone in Italy had veto rights (over reforms) is over," the centre-left premier wrote in his e-news.
"We forged ahead with reforms, even when the majority told us to stop... by dint of confidence votes too, when necessary.
We did not stop... in the face of the sacrosanct necessity of recognizing the rights of homosexual couples, because doing the opposite would have been uncivil".
Vendola also got support from Lower House Speaker Laura Boldrini, also of SEL, who slammed the rightwing attacks, which included Maurizio Gasparri from Silvio Berlusconi's centre-right Forza Italia berating the "the Left's use of the vile (surrogate motherhood) method". "I heard coarse, vulgar comments - it's sordid to stoop so low," Boldrini said. "I wish (Vendola and Testa) all the best and I hope this attack on their choice will stop. Nobody can express such harsh opinions against a child that has been born".
But top-selling Catholic weekly Famiglia Cristiana (Christian Family) also slammed Vendola. "The defender of the poor and the oppressed went abroad like a gentleman of means, orphaned a baby of its mother and eluded the (Italian) Constitution," the weekly wrote on its website. "Wasn't he supposed to be a leftist?" Vendola and Testa should be arrested for breaking an Italian law against surrogate motherhood as soon they get back to Italy, a Forza Italia MP said.
"Surrogate motherhood is a crime and it is serious that an Italian politician should fly abroad in contempt of Italian laws, with impunity," said Basilio Catanoso.
"If I were the interior minister I would immediately order the arrest of the couple on their return," he said.
Vendola hit back at the furore caused by the boy's arrival.
"There is no fascist-thug political vulgarity that can disturb the great joy that the birth of a baby causes," said Vendola, 57.
He denied "hiring a womb" in a mercenary way, saying the woman who gave birth to the child "is an integral part of our family and will continue to be so".
Vendola's former spokesman, journalist Vito Marinelli, told ANSA that Vendola "has become a symbol for the so many people who have this strong desire to be parents and find obstacles in their path towards realising their dream.
"It's as if a gate has opened on an infinite horizon," Marinelli said.
Tobia Antonio cannot be registered as the couple's son in Italy - at least until an adoptions law is introduced.
The baby has been registered as the biological son of Testa in Canada, where the Italo-Canadian Testa, 38, has a valid passport. California is one of the few US states that allows surrogate motherhood in monetary as well as purely altruistic forms.
One of the others is Texas.
'Lucrative' surrogate motherhood is also legal in India, South Africa, Russia, Georgia and Ukraine, as well as only Belgium in the EU.
The altruistic form alone is legal in the UK, Sweden, Netherlands, Denmark, Australia as well as Canada and the other US states. The mother of the child was reported to be an American of Indonesian origin.