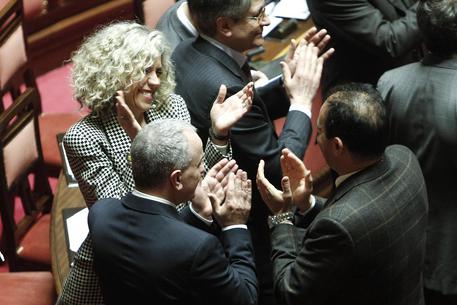 (ANSA) - Rome, February 25 - A maxi-amendment to a Democratic Party (PD) civil unions bill passed in a vote of confidence in the Senate on Thursday. The motion was approved with 173 in favor, 71 against and none abstaining.
Senators from the anti-establishment 5-Star Movement (M5S) boycotted the vote.
The bill passed after the PD scrapped two key measures in a compromise with Catholic conservatives - one that would have allowed stepchild adoptions and the other imposing a duty of fidelity.
The bill's rapporteur, PD Senator Monica Cirinnà, said the confidence vote on this watered-down version of the bill was a hollow victory.
"It's first step - a victory with a hollow heart," said Cirinnà. "This is a very important measure, but I am also thinking of the children of so many friends".
"Now we must take a second step," Cirinnà said. "We're halfway up the ladder". The bill now goes to the Lower House.
PD Premier Matteo Renzi hailed the vote on "a day that will remain in the history of this legislature and of our country".
"By requesting a confidence vote, we bound the government's very survival to a civil rights battle," the premier wrote on Facebook. "It hadn't happened before, and it wasn't easy now. But it was the right thing to do".
"Today Italy is a stronger country. Today we are all made stronger," Renzi wrote.
In related news, a group of Senators presented a bill to remove a section in the civil code referring to the obligation for spouses to be faithful to one another - after conservative Catholics forced a similar removal from the civil unions bill.
The bill was presented by Senator Laura Cantini from the ruling PD and backed by 11 others. Cantini said the marriage fidelity obligation was a "legacy of an outdated vision of marriage".
She said another Italian law had removed the distinction between legitimate and natural children, which was linked to the fidelity obligation. Furthermore, she said the agreement political parties have reached on civil unions recognised "a more advanced model" of conjugal relations that needed to be acknowledged in the civil code.