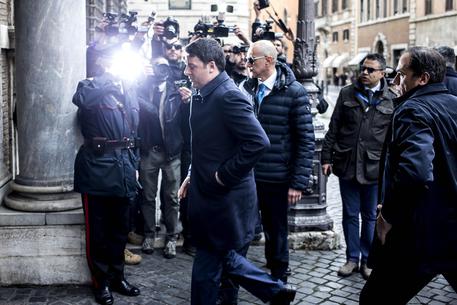 (ANSA) - Rome, February 23 - The Senate caucus of the ruling centre-left Democratic Party (PD) on Tuesday agreed to drop a so-called stepchild adoption provision in its civil unions bill.
It also agreed to the government filing a so-called maxi-amendment the bill, and putting this to a confidence vote.
That vote will likely be held Thursday.
The provision on adopting the biological children of partners, including same-sex ones, was removed after the anti-establishment 5-Star Movement (M5S) pulled its support for the bill last week.
Without M5S backing, PD Premier Matteo Renzi opted to turn to his junior ruling coalition partner for support. But the small New Center Right (NCD) party led by Interior Minister Angelino Alfano said this was conditional on the PD dropping the stepchild adoptions clause.
Renzi told his PD Tuesday that the M5S "can't make fools of the PD" by "playing games" over the bill, now in its first Senate reading.
He said he "defended" a bid to get the M5S on board but noted that "there was an unexpected about-face - they tricked us".
He said "now we can't risk sinking a law that is crucial to millions of Italians... the M5S are playing at the expense of rights with a cavalier position." The bill is set to go forward without the stepchild adoption measure as demanded by the NCD.
PD Senator Monica Cirinnà, the bill's rapporteur, said Tuesday that she backed Renzi's proposal to file a big amendment to the package and put it to a confidence vote.
"It's a vote of confidence in the country, not in the government," Cirinnà told a meeting of PD Senators.
The M5S on Tuesday said it was ready to vote for the bill and accused the PD of being "scared of parliament", arguing Renzi would rather maim the bill and be sure it will pass rather than risk submitting it to proper debate.
The M5S has been blamed for the dropping of the stepchild adoption provision because of its last-minute refusal to back a 'kangaroo amendment' that would have knocked down hundreds of other amendments presented by opponents to the bill, which otherwise would have had to be debated one by one.
The Renzi government has in the past used the so-called kangaroo to bypass opposition obstructionism in order to push other reforms through.
A leftist minority member of the PD appeared to agree with the M5S on this, saying the government was wrong to compromise with its center-right coalition partner. "Renzi chose to deliver himself to the NCD," said PD Senator Miguel Gotor. The bill might have passed as it stands after debate had the government not been in such a rush to push it through, Gotor argued.