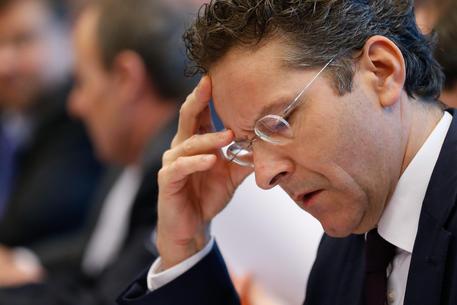 (ANSA) - Brussels, February 18 - Eurogroup President Jeroen Dijsselbloem said Thursday that the situation for European banks was not "disastrous" even though they have been hit hardest by the recent stock market turmoil. He also said that many banks needed to offload the bad loans weighing down their balance sheets and that it was "serious" that some small investors had not been sufficiently informed about the risks of buying bonds in lenders. Premier Matteo Renzi's government recently reached an agreement with the European Commission on a guarantee mechanism to help Italian lenders offload some of billions of euros of non-performing loans. The government has also come over fire over its recent rescue of four small Italian banks, which left investors with worthless shares and bonds in the lenders. Many of the small investors said they were not informed of the risks by the banks who sold them. "It's not true that the banks are in a disastrous situation," Dijsselbloem told the European Parliament.
"They are in a bad situation, although in individual cases there is still issues of the legacy of the crisis, such as enormous quantities of deteriorated credits.
"There's no magic wand to make them disappear, but it's necessary to offload them.
"As for clients who bought retail products subject to the bail-in (if the bank fails) without being sufficiently well informed, this is a serious problem".