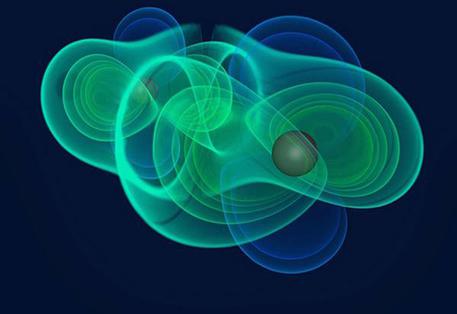 Gravitational waves caused by two black holes were found by the Laser Interferometer Gravitational-Wave Observatory (LIGO), and the data also analysed by the part-Italian, part-French VIRGO project at Cascina near Pisa.

VIRGO is run by the European Gravitational Observatory (EGO), which was founded and funded by Italy's National Institute for Nuclear Physics (INFN) and the French National Research Council (CNRS).

The discovery of gravitational waves "is a result that sets the seal on the theory of general relativity formulated exactly 100 years ago: it's a birthday present for Einstein", said the president of Italy's National Institute for Nuclear Physics (INFN), Ferrando Ferroni. He said it was "a great discovery, which follows that of the Higg's boson and which sees the INFN present again. Even with the great difficulties around us, we manage to find a way that leads us to the discovery". Thursday's announcement crowns a technological challenge, he said, "met on the one hand by the US, Britain and Germany with LIGO and on the other by Italy and France with VIRGO.

Education, University and Research Minister Stefania Giannini also hailed the discovery, achieved as it was partly through Italian expertise, as a fresh success for Italian physics. She lauded "all the researchers who, with this fundamental discovery, will enable us, from now on, to look at the sky with fresh eyes." She said that "after the discovery of the Higgs boson, the international community today celebrates another important scientific landmark: the first direct confirmation of the existence of gravitational waves. A perfect gift for the 100 years of Albert Einstein's Theory of General relativity, who was the first to think of them and describe them in his equations".

Gravitational waves are ripples in space-time - the four-dimensional concept in which time and space are combined into one continuum. Whenever an object moves throughout the universe, it creates these space-time ripples that move outward. It is similar to when an object moves through water. Usually, most gravitational waves are pretty weak, though, so it has been particularly hard for scientists to measure their existence up until now. But LIGO's observatories were designed specifically to pick up the slightest indications of gravitational waves.

Albert Einstein first put forth the idea of gravitational waves in his Theory of General Relativity just over a century ago. They are the last part of Einstein's theory that have yet to be proven, though their existence is generally accepted in the scientific community. Because of this, researchers have been trying to find evidence of the waves' existence for many years now. And at one point previous to Thursday, it looked like they had been found. In 2014, researchers working with the BICEP2 telescope near the South Pole said they had found evidence of gravitational waves by observing the early universe. But they later retracted their findings, saying the wave signals they saw were actually formed by cosmic dust.

After that disappointment, the scientific community was awash with enthusiasm about Thursday's good news - even though the LIGO and VIRGO results will still have to stand up to more scrutiny.