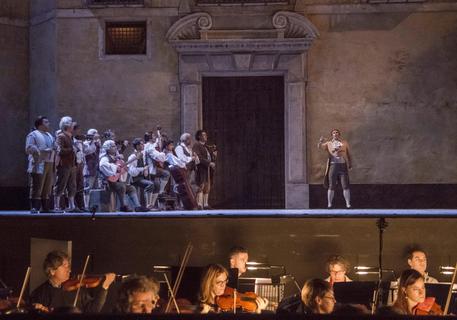 On February 11, a new production of 'The Barber of Seville' by Davide Livermore and with an orchestra conducted by Donato Renzetti will go on stage at Teatro dell'Opera. The well-known Rossini work was first performed at Teatro Argentina in the Italian capital in 1816. After Emma Dante's ' Cinderella' (which will be performed through Feruary 19), the opera house is thus continuing its celebration of Gioachino Rossini's works to revive the spirit of his works and understand their historical significance and not only as an homage to the composer's genius. A performance will be held on February 20 at 18:00, on the exact day of the debut. "Every opera is an extraordinary act of memory," the conductor said last week in presenting his 'The Barber of Seville' to the media.
"I entered the wake of a tradition that in 200 years has created a stratification of interpretations," he added.
The world "has been widely explored both from a musical and a text-based point of view - I am not interested in...
provocation as an end in itself," he said.
"In a work such as this one, directorial meta-readings are not useful, and can only be so in works that are fragile from a dramaturgical and musical point of view." Renzetti said he had wanted to "remove from the work all the 'mistakenly taken liberties' that had become consolidated over time, and only leave the traditions wanted by Rossini himself". To highlight what the conductor called "a visual kaleidoscope over the course of historic episodes, made concrete by scenic acts" Livermore used all theatrical elements - not just lighting and set design, but also costumes by Gianluca Falaschi, illustrations by Francesco Calcagnini, videos by D-Wok and magical effects by Mago Alexander. The result will be a surprising production but one that is entirely faithful to the original, said Rome Opera Theater Superintendent Carlos Fuortes.
The work is an "homage" to Commedia dell'Arte and "we must not fear" the laughter it will inspire, Fuortes said.