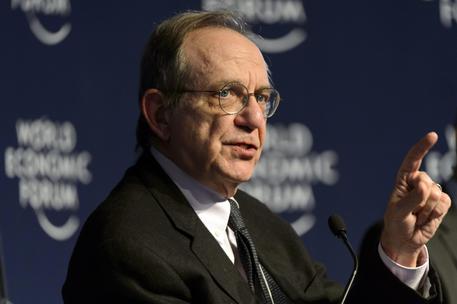 (ANSA) - Rome, January 22 - Italy is in an "intense" phase of negotiations with the European Commission regarding the creation of a bad bank, with talks focusing on the level of government guarantees for bad loans, Economy Minister Pier Carlo Padoan said on Friday.
EU Competition Commissioner Margrethe Vestager will meet with Padoan next Tuesday in Brussels, where the agenda, which has not yet been released, is likely to involve the bad bank project, ANSA sources said. Padoan added that the government will pass new measures next week to make it easier for banks to offload bad loans.
"Next week we'll introduce new measures to make ceding deteriorated bank credit easier," Padoan said.
Concerns about the number of bad loans on some Italian banks' balance sheets has been a factor in recent stock market turbulence, despite government reassurances that the Italian banking system is solid.
The Italian government, which recently authorized the rescue of four small lenders financed by healthy Italian banks, has been in talks with the Commission for some time about setting up a bad bank to relieve lenders of the non-performing loans without breaching European laws against State aid. Padoan said Friday that he was satisfied that the European Central Bank (ECB) has acknowledged Italy's banks are not fragile and complained that poor communication had contributed to the market turbulence that hit some Italian lenders particularly hard. "It's important that the ECB has clarified that there is no question of fragility in the Italian banks and that it has not requested any capital increases or other measures," Padoan said.
"The turbulence stemmed from less-than-efficient management (of communications) by some European institutions.
Some signals were misunderstood, as the ECB has admitted".
Earlier on Friday, ECB President Mario Draghi said that a letter the central bank sent to national authorities requesting information about how they are managing banks' non-performing loans (NPLs) had been misinterpreted. "It was nothing more than a way to know the different national practices on this," Draghi said at the World Economic Forum in Davos, Switzerland. European markets, including the Milan bourse, bounced back strongly on Thursday and Friday after Draghi said the ECB's interest rates will stay low for a long time and that the bank is ready to do everything possible to lift eurozone inflation towards its target of slightly under 2%. Draghi said Friday that the efforts to lift dangerously low inflation rates have suffered setbacks. "There is less cause for optimism about inflation prospects," Draghi said at the World Economic Forum. Draghi added that this is "not just due to the strong fall in oil prices" but also because of "the downward revision of the growth prospects of emerging economies".