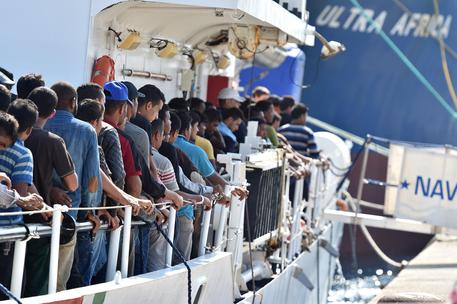 (ANSA) - Brussels, January 20 - Italy's third hotspot for migrant registration became operative in the Sicilian port of Pozzallo Tuesday, European Commission spokesperson Natasha Bertaud said Wednesday. In all, Italy has promised to set up six hotspots. European Immigration Commissioner Dimitris Avramopoulos recently said the hotspots in Italy and Greece must be opened within the next four weeks. Bertaud said a review of progress on the ground would be made at an EU summit in February.

The flow of asylum seekers into Europe could be an immediate driver of economic growth, the International Monetary Fund (IMF) said Wednesday.
"Rapid job market integration of immigrants has significant economic, budgetary and social benefits," the IMF said in a report on refugees in Europe. "The effect of the new workers on existing ones is limited," the report said, citing studies showing that migration flows do not affect the unemployment rate or the average wages of native workers.
Growth will be stronger in refugee and migrant destination countries, said the IMF.
Overall, it forecast 0.1% European GDP growth in 2017 due to the new arrivals.
Short-term costs for European host countries will be an estimated 0.05% of GDP in 2015 and 0.1% in the current year. For Italy, those costs were 0.17% of GDP in 2014, 0.2% in 2015 and an estimated 0.24% in 2016.
The ongoing refugee and migrant crisis points to the inadequacy of the European Union's asylum policy, the IMF said.
The EU needs to come up with a common asylum and border management system, the IMF said.
The priority for everyone is to address the humanitarian emergency in conflict zones and in neighboring countries, as well as in the countries lying on the refugee route and their countries of destination, the IMF said.
"The increase in refugees is a global challenge requiring global collaboration," said IMF Director Christine Lagarde.