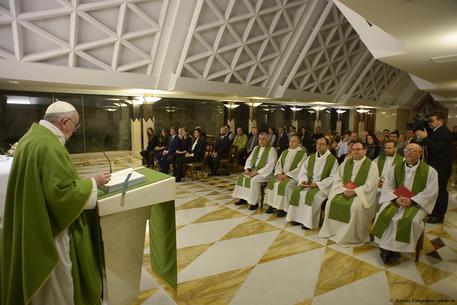 (ANSA) - Rome, January 13 - Monsignor Angelo Becciu, substitute for general affairs at the Vatican, said that portraying the Holy See Vatican as a "den of theives" in the wake of the Vatileaks 2 scandal is "an absolute falsehood".
"I find it supremely unjust that our employees, proud of working in service to the pope and for the church, for a while now have come to the point of feeling ashamed to tell people they work here," Becciu said in a excerpts released Wednesday of an interview in weekly newsmagazine Panorama set to hit newsstands Thursday.
Two recently-published books written by investigative journalists documenting alleged Vatican waste and mismanagement and lavish spending by clergymen are at the heart of the document-leaking scandal and current trial, and the authors are two of five defendants.
The other three defendants - Monsignor Lucio Vallejo Balda, who is currently in a Vatican jail; PR expert Francesca Chaouqui, and Balda's former assistant Nicola Maio - are charged with allegedly passing confidential Vatican financial documents to the journalists.
"The right of journalists to publish news in their possession is not under discussion," Becciu said.
"The doubts regard the way in which they came to have this news.
"I ask myself: why are the sources of the two books that Mr. Nuzzi has written both in jail?" Becciu said, referring to Nuzzi's previous book "His Holiness", which brought the 2012 arrest of Paolo Gabriele, former personal butler to Pope Benedict XVI.
Regarding claims in the books that Peter's Pence, the pope's traditional donation fund financed by the faithful, is used mainly to repay Roman Curia debts and is only in small part destined to the poor - two euros out of every 10 donated - Becciu was defiant.
"Do we want to bring the amount destined to the poor from two euros to six euros? Out of four thousand employees, we'd have to fire 400. We prefer not to give the Italian government this additional weight and hold to Pope Francis's recommendation - reform, but in a way in which no one loses their job".
Becciu called the alleged actions of Vallejo Balda and Chaouqui, who were both members of the now-defunct COSEA commission set up to advise Pope Francis on the reform of the Holy See's economic and administrative structure, "a slap in the face to the pope".
"They swore on the Holy Gospel to never reveal what they saw, heard, and read during the course of their work".
Regarding the most recent declarations by Chaouqui, who held a press conference last Thursday, Becciu was decisive.
"I don't comment on nonsense," he said.