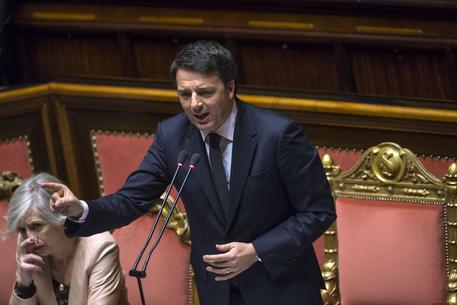 (ANSA) - Rome, December 16 - Premier Matteo Renzi obtained a green light from both houses of parliament Wednesday on Italy's position on terrorism and immigration ahead of a summit of European leaders December 17 and 18.
There can be no liberty without security, but at the same time, fighting terror is not tantamount to shutting the door on asylum seekers, he told lawmakers.
"There can be no possibility of freedom if citizens don't feel safe," he said.
"The notion that fighting terror is the same as fighting immigration must be rejected and I will say so tomorrow if you authorize me to do so". "Superficiality and vague speculation are always wrong, and most especially in foreign policy," he said.
There is no point in fighting terror by shutting down the Schengen Area. "We must make an effort to avoid a superficial reading of the situation," he told lawmakers. "I've heard some say let's shut Schengen down. To do what - keep them (terrorists) inside? The Paris attackers also had European passports," Renzi said. "Facing the issues means offering an alternative to the nihilism driving young people to blow themselves up in front of a theater or a bar". The center-left premier called for policies to "promote cultural education and a sense of beauty" as a way to combat nihilism.
Meanwhile Libya is the keystone to Italy's Mediterranean policy, the premier said.
"Even though there are no immediate threats it is essential that Libya be considered the keystone of our Mediterranean policy," he said.
"If there is a country in which Italy can play a significantly committed role, it can only be Libya".
The center-left premier ended by saying Europe must come up with a proper unified strategy if it wants to stay relevant on the world stage. "Security, diplomacy, military action - but if Europe wants to become a great beacon on global issues, it must indicate a strategy," he said.