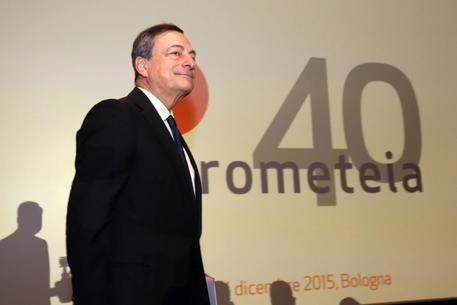 (ANSA) - Rome, December 14 - European Central Bank (ECB) President Mario Draghi on Monday praised Italy's overhaul of its insolvency regulations, because central bank stimulus measures must go hand in hand with structural reforms if the economy is to start moving forward in earnest. "The recent reform of the law that disciplines the state of insolvency should be evaluated positively," Draghi said. The comments come amid a furore over four small troubled Italian banks that have been saved courtesy of a government decree, although bondholders in the lenders, including many small investors, have lost their money. Draghi also said that unhealthy firms should be not able to do business. "The slow pace of the reabsorption of deteriorated loans prevents the necessary restructuring of the business sector, with companies reducing their debts and investing while others exit the market," Draghi said. The European central banker added that as much as the ECB is trying to drive the eurozone economy out of the doldrums, much also depends on each country undertaking structural reforms.
"Above and beyond current demand, investments depend largely on business confidence in the future - on how favorable the conditions might be at the micro level, and on growth at the macro level," Draghi said. He added that for example, cutting back on "administrative and bureaucratic burdens" would also reduce start-up costs and therefore increase the return on investments.
"Reforms improve demand expectations and encourage businesses to invest today," the European central banker said. "At the end of the day, investments are a bet on the future".
Draghi said in early December that his massive bond-buying or quantitative easing (QE) program will continue through March 2017 or until eurozone inflation edges up to the 2% area.
The bond-buying program - which is designed to push interest rates down while boosting credit - was launched January 22 and involves 60 billion euros in monthly bond purchases from across the eurozone. It was originally slated to end in September 2016.
Draghi said the QE program will be extended through March 2017 "or as long as necessary", that it would include purchases of regional and local government paper as well as national government bonds, and that the ECB will reinvest the proceeds.