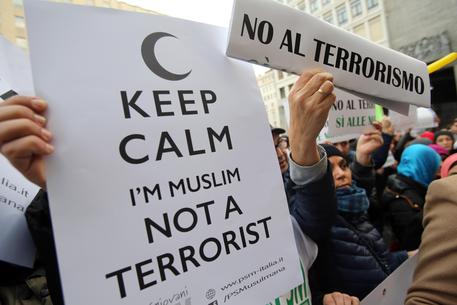 (ANSA) - Rome, November 27 - Most Italians do not see Europe as being at war with Islam after this month's terrorist attacks in Paris, but a sizable minority do, according to a poll released on Friday.
Some 58% of Italians reject the notion of Europe has started hostilities following the attacks in which 130 people died, including 28-year-old Italian doctoral student Valeria Solesin, and 45% say that Islam has not opened hostilities with Europe either, according to the Ixé survey for RAI television. Around 39% of Italians, on the other hand, say they believe that, after the Paris attacks, Islam is at war with Europe and 34% say they believe Europe has started a war against Islam.
Some 76% of Italians say their attitudes to Islam are unchanged after the Paris terror attacks, arguing that "one must not generalise". Only 22% of people polled said they have become more diffident to Islam.
Around 47% of Italians favour Italian military action against ISIS but only as part of an international coalition, according to the Ixè survey. Some 18% would support a unilateral Italian attack on ISIS while 32% say it is best to stay out and 3% said they don't know.
Premier Matteo Renzi's government has ruled out Italy taking part in direct action in Syria, but said it is increasing the number of Italian troops engaged in training in Iraq to contribute to the fight against ISIS. Foreign Minister Paolo Gentiloni said Friday that Italy and France were "discussing possible further forms of cooperation" in the fight against ISIS. "We are studying forms of further collaboration," he said, adding "we see absolutely eye to eye, as was shown yesterday" at a meeting in Paris between Renzi and President Francois Hollande. On Friday Renzi met United States Vice President Joe Biden in Rome.
Renzi and Biden saw eye to eye on the current troubled geopolitical situation, especially as regards Syria and Libya, sources said after the talks. The meeting at Villa Taverna, the official residence of the US ambassador, lasted about an hour, the sources said. They added that the encounter took place in an "excellent atmosphere" and that Biden expressed "great praise" of Renzi and Italy's commitment to the international coalition against terror and ISIS.