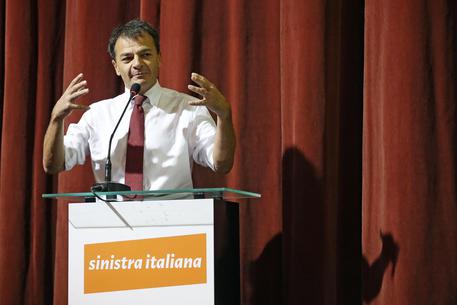 (ANSA) - Rome, November 9 - Former Democratic Party (PD) MP Stefano Fassina said Monday his new leftwing party does not rule out supporting a 5-Star Movement (M5S) candidate for Rome mayor.
"I do not rule out the possibility...if the candidate's program is more compatible with our idea of the development of a city," said Fassina, a former economy minister who left the PD in disagreement with Premier Matteo Renzi and whose new Italian Left (SI) party took shape with new parliamentary caucuses in alliance with the small leftwing Left Ecology and Freedom (SEL) party over the weekend.
The anti-establishment M5S led by foul-mouthed ex-comedian Beppe Grillo has allied itself with Britain's rightwing populist UKIP party in the European Parliament, and is currently Italy's second-largest party after the ruling PD.
"The so-called Italian Left pronounces itself ready to support Grillo's populist right-wing in Rome," PD President Matteo Orfini tweeted in response.
"The PD calls us fascists, (ex-premier Silvio) Berlusconi calls us Hitlerian cretins, and the Italian Left is ready to vote for us!" M5S MP Michele Dell'Orco wrote on Facebook, "I've lost the plot, call three ambulances...they're not well".
Former PD MP Alfredo D'Attorre announced that Italian Left was forthcoming on Friday. He said the new formation will include just over 30 Lower House MPs and 10 Senators, and will officially turn itself into a party in 2016.
"This is the birth of a new, non-radical, pluralistic...
left, which will finally offer a home to the tens of thousands of voters who have found themselves homeless," he said.
Renzi's ruling center-left PD has long been fighting internal leftwing dissenters over its labor and welfare policies as well as its Italicum electoral reform bill.
Ex-premier and leading leftist PD dissenter Pier Luigi Bersani told La Repubblica paper in an interview Friday that he disagreed with the choice of leaving the party, because this will drive disaffected voters into the arms of the M5S.