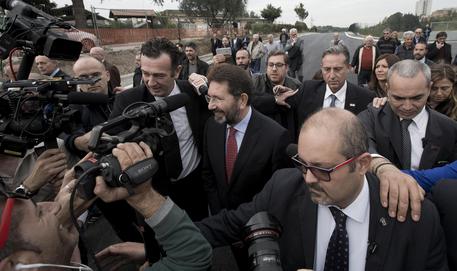 (ANSA) - Rome, October 28 - Rome's outgoing mayor, Ignazio Marino, is mulling a surprise U-turn on his recent resignation that would cause a major headache for his and Premier Matteo Renzi's Democratic Party (PD), which has lost faith in him.
Marino met 'in secret' with Rome PD commissioner Matteo Orfini amid the stand-off. The meeting took place at the home of Deputy Mayor Marco Causi, ANSA learned. Marino, who quit earlier this month after the PD pulled the plug over an expenses scandal, is increasingly said to be leaning towards withdrawing that resignation instead of confirming it.
By law he has until November 2 to do so.
In his last public statement he said he was "looking ahead" to future challenges.
"The mayor is still weighing whether to withdraw his resignation," sources said after a meeting of the Rome executive council that was initially expected to produce a decision by the first citizen.
Observers said Marino may now wait until after the next item of business, completing the transformation of the Roman Forum into a pedestrian zone, to announce he will try to cling on despite the PD's overt lack of support.
A U-turn would leave the PD in a quandary as to whether to join forces with opposition forces and vote no-confidence in the controversial official.
The PD is reportedly split among those who are ready to vote Marino out and those who would like Renzi to come out and get his hands dirty by virtually ousting him.
There has been widespread speculation that, in order to avoid nasty secrets in store from a confidence vote, which is secret, the PD may ask its Rome members to resign en masse.
As is stands, 28 votes are needed on Rome's 55-member council to get a majority and fell a mayor, while the PD only has 19.
There has also been speculation that the opposition - such as Beppe Grillo's anti-establishment 5-Star Movement and Silvio Berlusconi's centre-right Forza Italia party - may opt not to add its weight to a PD no-confidence motion, in order to embarrass Renzi's party and potentially force the premier's hand. Some observers have mooted, further, that Marino will pull his resignation in order to gain some leverage for another top post for the PD, although many observers think Renzi will be so irked by a U-turn that he will banish the former liver transplant surgeon for good. Marino said earlier this week he "would not disappoint" supporters, quoting Che Guevara's saying "We are realists, we want the impossible" and also likening himself to Chilean leftist leader Salvador Allende.
The PD says the expenses row that ultimately led to Marino's erstwhile demise was just the last in a long series of cases that mean the mayor cannot regain its trust.
In the latest row, Marino has said he never used public money for private ends.
He told a press conference last week that he had "never used public money for private purposes, if anything the contrary".
He said when he met social housing officials in New York last summer, for instance, that "I paid for the hotel myself".
He also noted he was not under investigation in a criminal probe.
Marino stepped down after two opposition parties filed suits claiming he ran up thousands of euros of private expenses on his municipal credit card.
He was effectively ditched by the PD who pulled the plug after months of sometimes grudging support through woes including the 'Capital Mafia' case, an illegally parked car, the glitzy funeral of a mafia boss and Pope Francis's public disowning of him after he claimed to have been invited to an event in Philadelphia.
The city of Rome has asked to stand as civil plaintiff in the Capital Mafia trial, starting November 5, involving allegations that an organised crime group muscled in on council contracts worth millions including work with migrants and Roma.
Most of the Capital Mafia cases began under Marino's rightwing predecessor Gianni Alemanno.
Marino has claimed credit for unearthing much of the graft.
But aside from the rows that have undermined his position, Marino's record on trying to solve Rome's many woes, from potholes to traffic to graffiti and general urban neglect that has won international attention, has been spotty at best.
The PD's commissioner in the capital, Matteo Orfini, spoke up Wednesday in support of his PD colleague Fabrizio Barca, who had expressed concern over the party's progress in the capital in light of Marino's resignation.
"Fabrizio, the process of renewal and rebuilding Rome's PD won't stop because of manipulative opportunists. In these months we've fought a lot together and together we'll continue to change Rome's PD," Orfini wrote on his Facebook page, attaching an interview Barca conducted with Italian daily Il Fatto Quotidiano that was republished on PD's website.
In that interview, Barca said, "Marino's resignation has hit us at the most difficult point, halfway, before the rebuilding (of the party). I'm very concerned that the process of change will stop and go backwards".
Referring to Marino, Barca said, "You can't say in public, 'I'll give the money back.' A poor man who steals three kilos of pears in the market, can he give them back as if nothing happened? Too many mistakes, in the end he (Marino) was no longer defensible". Barca recently concluded a survey of PD chapters in Rome which found that the personnel in some of them were not up to acceptable standards.
The former Bank of Italy and Treasury official has been tasked with revamping the party structures in Rome so as to make them fit for purpose and avert any more scandals.
Also weighing in on the Marino problem was the leader of the PD's internal leftwing minority, Pier Luigi Bersani, who called for discussions "for all the nights necessary" to resolve the apparent impasse, as was in the party's tradition.