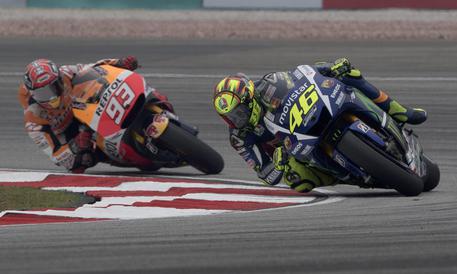 (see related) (ANSA) - Rome, October 26 - Giovanni Malagò, the head of Italian Olympic Committee CONI, said Monday that he was backing Valentino Rossi in the row over his clash with Marc Marquez at the Malaysian MotoGP Grand Prix. He added that punishing Rossi by making him start the season-ending race in Valencia from the back of the grid risked distorting the outcome of this season's championship of motorcycling's premium class. "Valentino himself has recognised that he let himself get dragged into provocation," Malagò said. "Some of the responsibility is his, but I want to defend him and not just for institutional reasons. I think that, in this way, the world championship is being distorted". Some media outlets, especially Spanish ones, suggested Rossi kicking out at Marquez was the motorcycling equivalent of former France great Zinedine Zidane's moment of madness when he headbutted Italy's Marco Materazzi during the 2006 World Cup final. But many Italians are sticking up for Rossi, especially in the light of footage that appears to show Marquez bang his helmet into the Italian's leg before he reacted.
Malagò said the incident proved that Rossi's claims before the race that Marquez wanted to scupper his title hopes to favour his compatriot, Jorge Lorenzo, "were absolutely true". But the head of Italian sport also advised Rossi not to snub the last race of the season.
"I understand his sorrow and anger... but I'd say he should participate in order not to give an alibi and satisfaction to the people who created this problem". Ernesto Carbone and Stefano Esposito, lawmakers for Premier Matteo Renzi's centre-left Democratic Party (PD), supported Rossi via Twitter with posts carrying the hashtag #iostoconVale (#i'mwithVale). Materazzi and Italy's 2006 World Cup-winning coach Marcello Lippi also came out on his side.
"There are men and there are little children," Materazzi commented on social media with the hashtag #difendiamoVale46 (#let'sdefendVale46) along with the video showing Marquez's helmet touching Rossi. Lippi told RAI radio that Rossi had "fallen into a trap" adding that "as always, a great champion generates great envy". Paolo Rossi, the top scorer in Italy's 1982 World Cup-winning campaign in Spain, said Rossi should do what his Azzurri side did and show the Spaniards who is best on their own territory.
"Show that you're greater than all the rest," the former striker told ANSA.