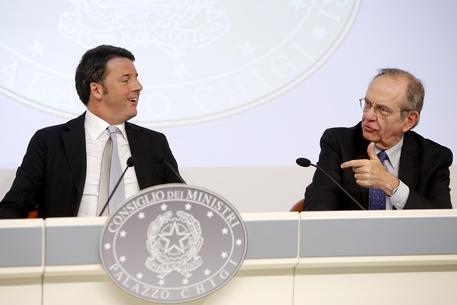 (ANSA) - Brussels, October 19 - The European Commission (EC) will likely not send Italy's budget bill back for changes, qualified EU sources said Monday. The climate after a first EC reading of the proposed budget is "positive" as Italy is said to be "more solid" than last year. Granting flexibility because of Italy's spending on migrants remains an issue, the sources said. The draft budget the government has sent to Brussels puts current spending on the migrant emergency at three billion euros, with a total cost of 3.3 billion euros, sources said Friday. Of these, 50% is spent on hosting the asylum seekers and 20-30% is spent on rescuing them at sea. Italy is requesting deficit flexibility based on these numbers. The budget currently amounts to 27 billion euros but this may rise to 30 billion if the EU OKs a clause on the migrant emergency, allowing Italy to raise the budget-to-deficit ratio from 2.2% to 2.4% - equivalent to just over three billion euros. Premier Matteo Renzi said last week he would send the same budget back to the European Commission if Brussels says it should be overhauled. The EC has repeatedly said it does not like the property-tax cuts in the 2016 budget bill, reminding Renzi that its standard recommendations to member States go in quite the opposition direction - to shift the burden from labour and consumption onto property among other things. The elimination of property tax IMU and property-related service tax TASI has also come in for criticism from the domestic opposition, which argues it is unfair to slash taxes on all residences, including castles and villas whose owners can well afford to pay. Renzi has retorted by saying his government, unlike previous centre-left ones, is out to ease poverty but not at the expense of targeting rich wealth creators. The premier made it plain Friday he would not stand for any Brussels strong-arm tactics, of the kind Italy has so frequently had to submit to in previous years.