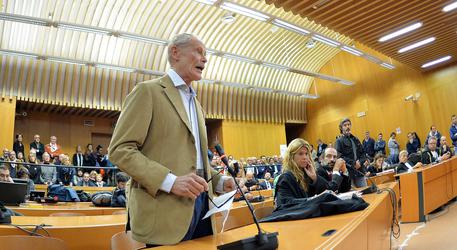 (ANSA) - Turin, October 19 - Italian writer Erri De Luca was cleared by a Turin court of charges of instigating crime by encouraging 'No-TAV' high-speed rail protestors on Monday.
The judges ruled that "a crime was not committed" and the sentence was greeted by applause from members of public present.
De Luca was on trial for allegedly instigating crime by encouraging protestors against the controversial TAV high-speed rail link between Turin and Lyon, saying that "every action" against the project was legitimate in 2013.
"An injustice has been averted," he said. "This court is an outpost of the near future".
Earlier on Monday the writer had stood by his words in court.
"I confirm my conviction that the so-called high-speed line should be hindered, prevented and sabotaged for the legitimate defence of the earth, air and water," De Luca said before the judges gave their verdict. De Luca, who is an ex-militant of the 1970s radical leftwing group Lotta Continua (Continuous Struggle), also bemoaned that he has not been defended by fellow writers in a case that he said has an impact for freedom of speech. Critics of the TAV project have highlighted its high cost and damage to the environment. France and Italy argue it will save money and help the environment in the long run by cutting down on automobile traffic. Anti-TAV activists have organized a series of protests against the high-speed rail link throughout Italy over the last few years, some of which included violent clashes with police, vandalism, threats and disruption of highway traffic.