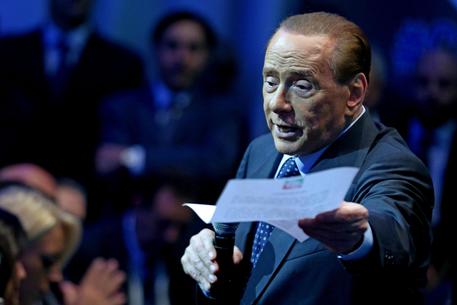 (ANSA) - Rome, October 16 - Former Italian premier Silvio Berlusconi sounded off Friday on a broad range of current events, from the government's budget bill to his own allegedly 'political' trials, and said current Premier Matteo Renzi has "authoritarian impulses," while speaking at a regional conference of local administrators.
"Renzi has shown authoritarian impulses, and we can't let this happen in our country," he said.
Berlusconi, who leads the country's Forza Italia (FI) party, ran down the list of voter approval levels for Democratic Party leader Renzi and Northern League leader Matteo Salvini, who he said stand at 30.5% and 26.7%, respectively.
"I'm at 25%, and it's a miracle because they're on TV six hours a week. I'm (on TV) six hours a year, but if I come back to TV they assure me that in a few months we can get Forza Italia back to up to 25% from the 12% it's at now," Berlusconi said.
Most opinion polls have FI at below 10%.
Speaking about the cabinet's approval of the budget bill Thursday, Berlusconi used a play on words when he said, "Renato Brunetta says it well: it's not a game-changer but a game-cheater, just like it was with the 80 euros,". Berlusconi was referring to the famous 80-euro-a-month tax bonus Renzi introduced last year for low earners which Renzi announced Sunday will no longer feature in people's pay packets, but will instead be transformed into an extra form of tax deduction.
Berlusconi suggested that rather than an exit from the euro, a national currency could be used alongside the currency now used by 18 European nations.
"I remember, after World War II, that in Italy there was a second currency that stayed alongside the lira from 1943 to 1953. I'm not saying to leave the euro, but I haven't found any rule in the EU treaties that forbids the adoption of a national currency, and we already have a name: it's called lira, the market gives it an exchange rate with the euro, why not give it a try?" Calling Salvini of Northern League an "important ally", Berlusconi said, "The League is at 16%, it has to stay with us".
Berlusconi also spent time lamenting his "politicized sentences" and compared his "political trials" to those of Socrates, Jesus, and Stalin.
"Some people tell me I shouldn't say it, but even Jesus had a political trial," Berlusconi said.
"When I'm not as young as I am now, I'll write a book, and I invite you to have your children read it," the 79-year-old said.
"With politicized sentences they took out the leader of the centre-right, the head of the opposition. Like they say, 'when the cat is away, the mice will play,' and the mice have had such a party that in the last Senate vote there were as many as 49 centre-right senators who gave their vote to a bungled Senate".
Berlusconi called Tuesday's arrest of former Lombardy deputy governor Mario Mantovani of Forza Italia "inconceivable".
Mantovani stepped down Wednesday after his arrest in a probe into suspected kickbacks.
"We've read the accusations and his arrest is inconceivable," Berlusconi said.