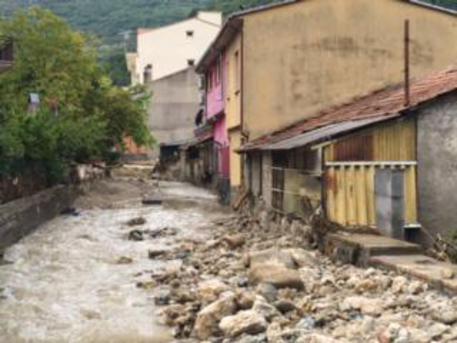 (see related) (ANSA) - Rome, October 15 - Storms and heavy rainfall continued to batter parts of Italy on Thursday as the authorities counted the human and material cost of Wednesday's exceptionally bad weather.
The civil protection department in southern Campania, where two of the five victims died, extended its severe weather warning across the region until Friday afternoon. The province of Benevento has been particularly badly affected by the extreme weather spell, with schools in the privincial capital closed through Saturday and ongoing disruptions to rail services along the Foggia-Caserta line after the Calore river burst its banks. Telecommunications services in the area have also been affected after two fibre-optic cables were damaged in a landslide and blackouts have been reported due to water damage. Rubbish collection services have also been suspended in the provincial capital as a result of flooding and 35 families have found temporary shelter with the local Caritas. Nunzia De Girolamo of the opposition party Forza Italia, herself from Benevento, called on the government to declare a state of emergency in Campania and other southern regions hit by the bad weather. Elsewhere, in the southern island region of Sicily two people were slightly injured when a train derailed near Caltanissetta. Further north in the southern Lazio province of Frosinone authorities were working round the clock to clear damage caused by flooding and landslides. Also on Thursday a Ryanair flight from Bergamo to Cagliari returned to the northern city shortly after takeoff at 8.30 local time after being struck by lightning. No-one was hurt in the incident and the plane re-departed for its Sardinia destination three hours later.