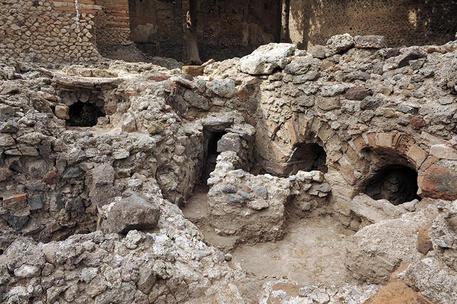 (ANSA) - Naples, October 1 - New photography and laser scan technologies are being employed to help with the latest excavations at the ancient city of Pompeii which are focused on the Republican Baths, the fifth and possibly oldest thermal bath structure identified in the archaeological site.
In the first century AD, around the time of the Vesuvius eruption which buried the city, the building that held these ancient baths fell into disuse and was incorporated into private residences, such as the House of Lime and the House of the Red Walls. In 1950, the archaeologist Amedeo Maiuri documented its layout, but then no further efforts were made to pursue excavation of the site, which had been entirely covered by earth and vegetation.
Thanks to a new project by the University of Berlin, in collaboration with Oxford University and supported by Pompeii authorities, a two-phase study of the site is now underway.
The first phase, carried out in March, involved a general cleaning of the area and an architectural survey. The second phase, a three-week period of excavation which ended in recent days, aimed to investigate how the architecture and technologies used in thermal baths had evolved over time.
The Republican Baths, which are documented among the oldest of their kind in Pompeii, were an experimental construction preceding the nearby Stabian baths which represent a perfect model of the traditional spa complex.
Confirmation that the Republican baths are in fact an older structure could be found in the presence of ventilated underground cavities that created a room for hot air to heat the thermal baths, consisting of a series of parallel channels, instead of the traditional system of columns of bricks that were more commonly used in Roman baths.
Investigations were focused on the sauna and the furnace within the baths, which are among the earliest examples from the transitional phase from the Greek to the Roman model. The aim is to specify their chronological development and operations. Aside from the excavation work, a new map of the area has been created as well as a survey of the site using photographic and laser scan technology.
Pompeii authorities said the investigations would continue in future and the results of the research were crucial for planning restoration and conservation projects, and deciding how to open the area to the public.